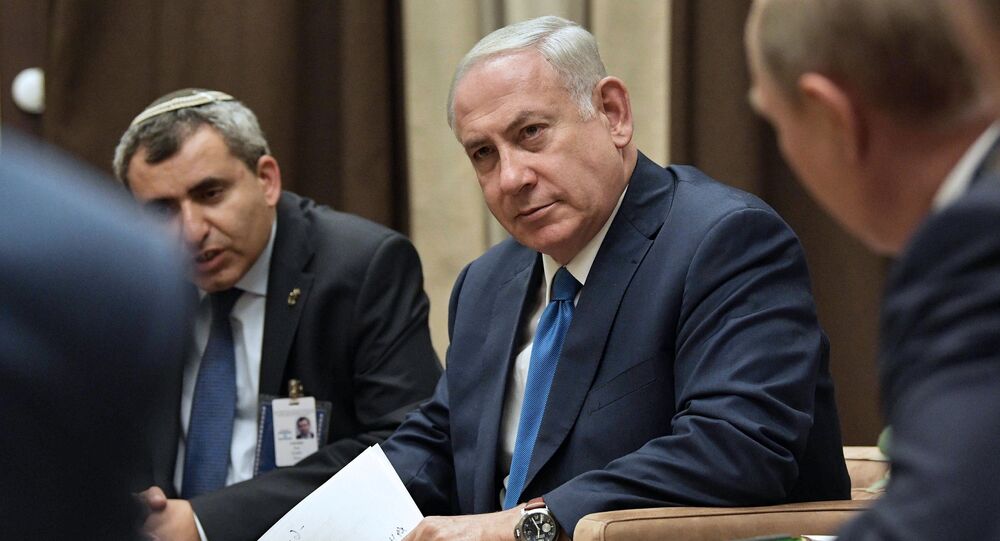 During the meeting, which took place on Wednesday in Moscow, Netanyahu reiterated his country's readiness to continue countering Iran and praised the role of Russian-Israeli cooperation in ensuring regional stability.

"Iran and its allies are the biggest threat to regional stability and security", Netanyahu said, as aired in the "Moscow. Kremlin. Putin" programme on the broadcaster Rossiya 1.

Netanyahu has long been pursuing anti-Iranian policies. Over recent years, it has been advocating the review of the Iranian nuclear deal with an aim at resuming global pressure on Iran. Israel has also been opposing what it calls Iran's military presence in Syria, though Iran itself has stressed that it only sends advisers at the request of the Syrian government.

According to the prime minister, he and Russian President Vladimir Putin had agreed that the withdrawal of foreign forces from Syria was a common goal for Israel and Russia.

"President Putin and I agreed on a joint goal — the withdrawal of foreign forces that were deployed to Syria after the start of the civil war. We agreed to create a joint group to achieve this goal with the participation of other parties," Netanyahu said at a government meeting, as quoted by his office.

© AP Photo / Maxim Shipenkov, pool
Two Rivals, One Bloc: Analyst on How Israel, Iran Will Work With Russia-Led EAEU
Netanyahu also said that Israel and Russia would maintain a mechanism for military communication in order to avoid accidental clashes between them during operations in Syria.

Russia-Israel relations were put to test following the fatal crash of the Russian Il-20 plane in September 2018 that the Russian Defense Ministry held the Israeli Air Force responsible for. The plane was downed by a missile launched by Syria's air defence system targeting Israeli F-16 jets that were carrying out airstrikes in Syrian Latakia province. The incident claimed the lives of 15 Russian servicemen. A high-ranking source in the Israeli government said Wednesday after the Putin-Netanyahu meeting that Israel and Russia had overcome the crisis in bilateral relations that was caused by the incident.