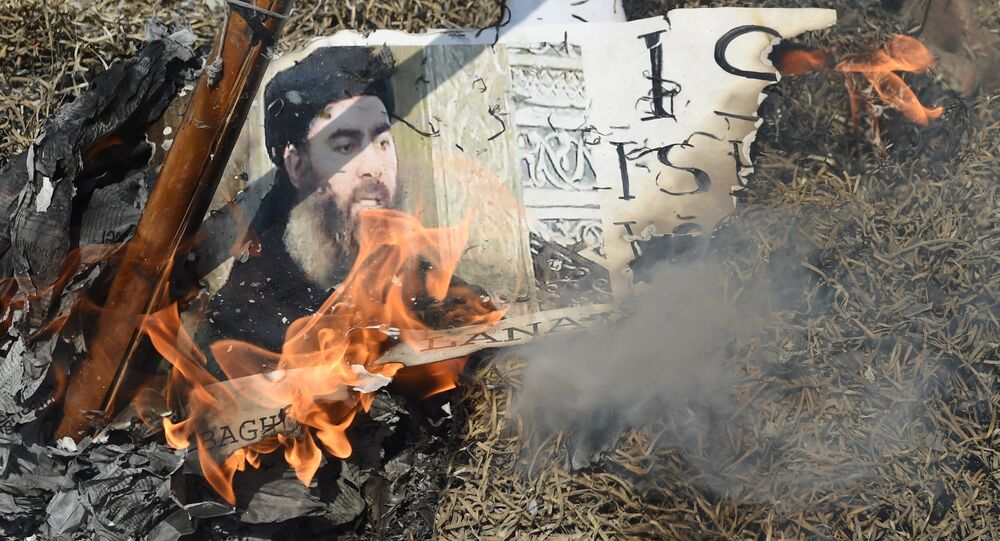 DAMASCUS (Sputnik) — Hassan Salem, an Iraqi lawmaker, said on Wednesday that the leader of the Daesh terrorist group, Abu Bakr Baghdadi, travels freely through Iraqi desert in the province of Anbar under protection of the US military.

"IS [Daesh] leader Baghdadi is in the Western Desert in Anbar province under US military's protection… He travels between Iraq and Syria protected by the United States", Salem said, as quoted by the Lebanese El-Nashra news outlet.

The lawmaker noted that support of the Daesh leader was provided from Ayn al-Asad airbase, where US troops were deployed. Salem also added that the United States "supported Baghdadi out of concerns over possible endorsement of bill on expelling US troops from Iraq".

Baghdadi's death has been reported numerous times in recent years, but the terrorist leader has re-emerged each time. In June 2017, the Russian Defense Ministry said that Baghdadi could have been killed as a result of a strike by the Russian Aerospace Forces on May 28, 2017, in the southern suburbs of Raqqa. But in September 2017, an alleged audio recording of Baghdadi emerged, casting fresh doubt on whether the terrorist leader is currently dead or alive.

© Sputnik / Vitaliy Belousov
Canadian Man Trying to Join Daesh Turned in By Taxi Driver, Faces Jail at Home
Earlier in February, a member of the Fatah Alliance told Sputnik that a bill calling for withdrawal of US troops from Iraq could become one of the first to be debated by the national parliament after the recess.

On 3 February, US President Donald Trump told CBS News in an interview that the United States was keeping it troops in Iraq in order to be able to "watch Iran". Following the statement, Iraqi Parliament First Deputy Speaker Hassan Kaabi said that the legislature intended to work out a bill on termination of the security agreement with the United States, which will lead to withdrawal of all foreign troops from the country.

Iraqi President Barham Salih also noted that Washington did not request permission from Baghdad to deploy US troops to the country in order to "watch" Tehran.