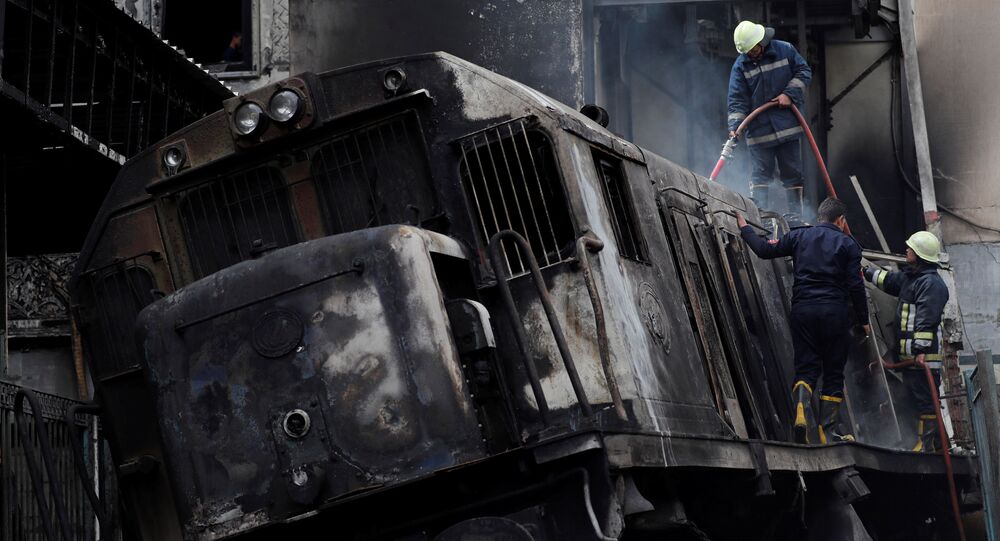 Earlier in the day, the train derailed and crashed into a platform at the Ramses station in Egypt's capital. The crash caused the fuel tank to explode, and the resulting fire spread over the train and the platform.

At least 28 people were killed and over 50 were injured in the train fire in central Cairo, according to a source in the Egyptian Health Ministry.

Surveillance cameras recorded the moment of the train explosion at Ramses station.

Earlier, a video of burning people running in the train station was posted on Twitter. (The following video is graphic and may offend sensibilities)

Witnesses told Sputnik the locomotive sped past them before crashing into Platform 6, which caused its fuel tank to explode. At least 20 people died in the blast and around 50 were injured.

"The locomotive sped along the platform like crazy and rammed this building at full speed. There were no cars," Mohammed, a bookseller who has a booth on Platform 6, said, pointing to a wrecked building on the platform’s edge.

The gutted locomotive remains on the tracks. Firefighters have been dousing it with water for hours. The fate of the driver is not clear. Some witnesses claim he jumped out moments before the collision.

"He escaped certain death. He probably figured he would not make it and jumped out. He might have run away or been taken to a hospital," a cafe visitor told Sputnik.

Ahmed, who was inside the Ramses train station when he heard the explosion, said he hurried to the platform and saw police and medical staff retrieving charred bodies from the rail track.

"There were quite a lot of bodies there," he added.

Those caught up in the blaze were waiting on the platform or sitting outside a cafe, porter Mustafa said. The blast ripped through the area, hitting nearby cars, bending iron poles, and shattering windows.

The train station, Egypt’s main transport hub, was packed with travellers soon after the tragedy despite reported evacuation. Apart from the charred locomotive, there is a heavy police presence and a dozen ambulances parked outside to remind of what happened.