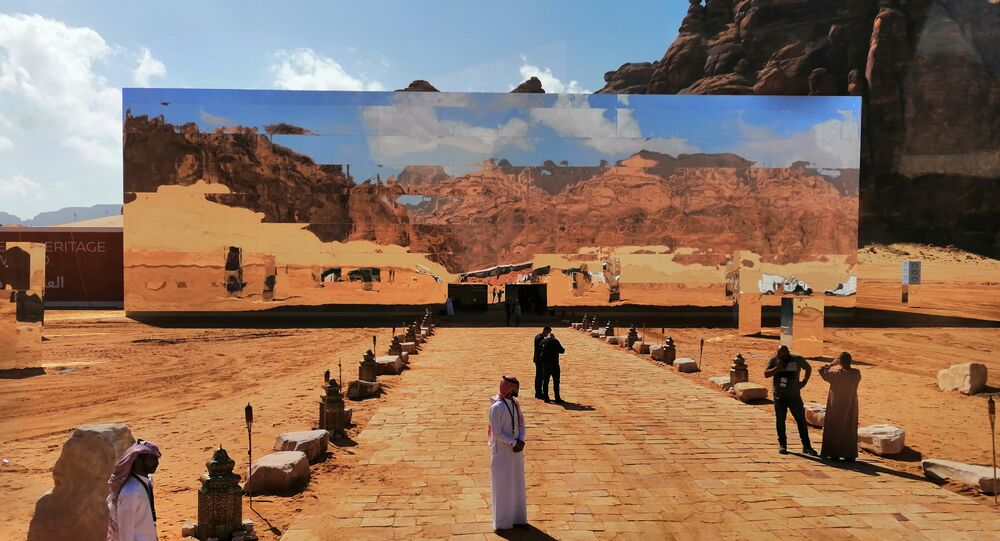 Saudi Arabia is taking steps to open itself up for the outside world by promoting its historic heritage sites. On Sunday, the country’s Crown Prince Mohammad bin Salman launched several tourism projects in Al Ula – an ancient area in the western part of the Kingdom.

Madain Saleh can be easily called a hidden gem in the treasure trove of Saudi Arabia's historic sites. Millions of Muslim worshipers go on a pilgrimage to Medina, which is just several hundred kilometers away from this location, but not many people get to see with their own eyes the ancient tombs of Madain Saleh — a UNESCO World Heritage site, which represents the nomadic Nabataean civilization.

We were taken on a helicopter tour around Al Ula’s main archeological sites, such as Madain Saleh tombs, as well as other landmarks, including a newly-built concert hall, which hosts this year’s Winter at Tantora festival. pic.twitter.com/lWG0Lpn4Kq

​Although Saudi Arabia has been accepting Muslims going on a Hajj for many years, the Kingdom hasn't been as accessible for other visitor categories.

It took the country several years to make a drastic turn in its tourism policy. First major changes became apparent during last year's Formula E championship, when visitors were allowed to enter Saudi Arabia with an electronic visa. Such initiatives get a lot of support from Saudi authorities.

The dedication of our youth and their great spirit will contribute to #AlUlaVision success. My sincere appreciation to HRH Crown Prince Mohammed Bin Salman for his continued support and valuable confidence. pic.twitter.com/hWdob67939

​It's expected that in just a few years' time, the Al Ula region will be hosting seasonal cultural events designed to boost international tourism. However, there is no talk about mass tourism which is typical for other Gulf nations.

According to the CEO of The Royal Commission for Al-Ula Amr AlMadani, such approach by the Saudis is intentional and is a part of a long-term strategy.

"We have two phases of development" — he told journalists — "First one will end in 2023 and we will start with 250000 visitors. Al Ula is bigs. The sites are disparaged, and there is very good chance to become very creative in our regional planning. We believe, that in our "Phase Two", after 2035, we will circulate around 1.5 to 2 million, while still making heritage and nature first."

Saudi officials say that Al Ula's infrastructural development program will help to put a new resort designed by a renowned French architect on the region's map, while environmental protection measures, such as the opening of the Sharaan nature reserve, which was also launched by Crown Prince Mohammad bin Salman on Sunday, will help to save the rare species, with the endangered Arabian leopard being on top of the list.

© REUTERS / Ahmad Masood
Saudi Arabia Looks to Boost Haj Tourism Revenues Amid Falling Oil Prices
When it comes to tourism, archaeology and cultural projects, the Saudis received a lot of support from Moscow.

Russian Direct Investment Fund is already working on a number of joint projects with Riyadh, and, according to the Fund's CEO Kirill Dmitriev, the potential for such cooperation is growing.

"Not only do we have great cooperation on oil and investments, and economy and geopolitical cooperation, but I think tourism is a very important area for cooperation. There are 6 million tourists visiting Turkey, it's up 25% this year, 3 million Russian tourists are visiting Egypt. And, of course, the Saudis are interested to bring more Russian tourists to the Kingdom," Kirill Dmitriev said.

Dmitriev added, that Moscow and Riyadh are also discussing possibilities for joint investment with the Saudi fund in tourist destinations in both countries.

Russian Direct Investment Fund CEO Kirill Dmitriev on Russo-Saudi cooperation in Al Ula: “Russian archaeologists, who were really not allowed too much to work here, now will be allowed, and Hermitage will be the first museum to send its team to work here.” pic.twitter.com/zohUuL9gN9

It's likely that all other side-projects, including archaeological surveys, in which Russia is planning to take part, will run in parallel with Al Ula's infrastructural development.