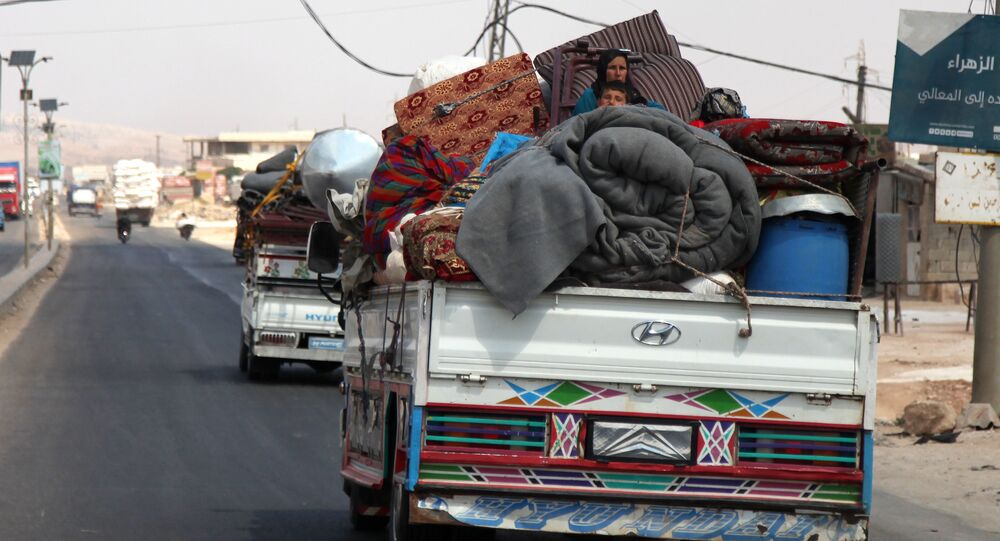 Speaking further, the official said that White Helmets were equipping hotels with cameras in order to capture civilians harmed as result of provocation with the use of chlorine.

"According to our data from the scene, about 10 days ago, several containers with chlorine left [the western Syrian city of] Jisr al-Shughur for the Khan Shaykhun area, in the south of the Idlib province. The transportation took place under the coordination and cooperation between the White Helmets and the Nusra Front. The containers with the toxic substance were transported in two ambulances," the rights activist said.

© REUTERS / SANA
UK Backs US' Claims on November Chlorine Attack in Aleppo
According to Kazem, the containers were put into freezers in Khan Shaykhun and could be later used for attacks against civilians.

"The containers are expected to be used against civilians living in this area or other [regions]. We have information indicating that White Helmets representatives have installed photo and video equipment in a number of hospitals in order to later film civilians who would fall victims to the [possible] provocation," Kazem added.

Western countries have repeatedly accused Damascus of using chlorine, without providing sufficient evidence. The Russian Foreign Ministry has called such claims "insinuations," while the country's Defence Ministry has refuted the statements, claiming that it was based on rumours.

At the same time, the Russian Defence Ministry has warned numerous times that Syrian militants and the White Helmets were planning to stage a false flag chemical weapons attack in Syria to frame Assad's forces and draw western retaliation against the Syrian government.

The recent attack occurred in November, when, according to the Russian Defence Ministry's Centre for Syrian reconciliation, terrorist groups located in the Idlib de-escalation zone, fired 120-millimeter shells at the northwestern districts of Aleppo from the southeastern part of the demilitarized zone.

As a result of the attack, 46 people, including 8 children, received chemical injuries.

The White Helmets claims to be a group of volunteer rescue workers, who allegedly carry out rescue operations in Syria. However, the group has faced severe criticism on the part of both Damascus and Moscow, which accuse the organization of supporting terrorists and staging provocations involving chemical weapons, aimed at justifying potential foreign interventions in Syria.