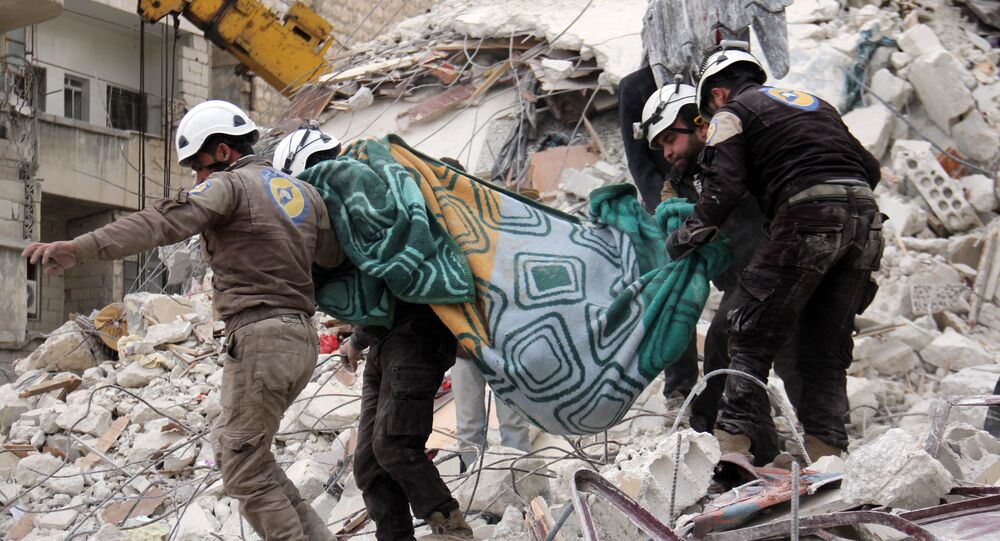 The Russian Foreign Ministry said on Thursday that Moscow is concerned over the fact that terrorists have not abandoned their attempts to stage chemical attacks against Syrian civilians.

The White Helmets have deployed equipment in several hospitals in the Syrian province of Idlib to film false flag chemical attacks and blame it on Damascus, Russian Foreign Ministry spokeswoman Maria Zakharova stated on Thursday.

"There are also serious concerns about reports that terrorists are not abandoning attempts to fake the use of chemical weapons against civilians. According to available information, a group of activists, the notorious pseudo-humanitarian organisation, the White Helmets, have prepared the necessary equipment in several hospitals of Idlib to film such provocations", Zakharova said at a briefing.

The spokeswoman elaborated that tensions were running high in the Idlib de-escalation zone, saying that Tahrir al-Sham militants are carrying out daily shelling of nearby settlments and actively building up their forces near the contact line with Syrian government forces.

© AFP 2021 / Delil SOULEIMAN
US Reportedly Sends Scores of Trucks With Arms to Syria Amid Troop Exit (VIDEO)
The notorious NGO has repeatedly been busted staging and filming false-flag attacks: last April, the group published footage featuring doctors in Douma hospitals treating patients that had suffered from an alleged chemical attack by the Syrian Arab Army.

Reports of the purported use of chemical agents in Eastern Ghouta surfaced on 7 April 2018 in some media, citing militants on the ground. A number of Western countries, including France, the US and the UK, quickly picked up the claims, and instantly accused Syrian President Bashar al-Assad of having dropped a chlorine bomb on civilians.

Damascus vehemently denied the allegations, denouncing the attack as a staged provocation to justify potential foreign intervention. Immediately after the purported incident, Moscow dispatched its chemical corps commission to inspect the site and determine whether there had been an actual chemical attack; the expert group, however, found no traces of chemical agents in Ghouta.

US Troop Pullout From al-Tanf

Speaking of the envisaged US withdrawal from Syria, Zakharova said that Moscow had urged Washington to immediately pull its troops out of the al-Tanf zone and transfer the area to Damascus's control.

"We urge Washington to immediately withdraw its troops from At Tanf are and transfer control over this territory to the Syrian government, which could take care of its citizens as we see it can do".

Zakharova also drew attention to the "plight of the inhabitants of Rukban camp for internally displaced persons", which is located within the 55-kilometre security zone set by the Pentagon.

“The full responsibility for the depressing situation in the camp is borne, of course, by the United States, which illegally occupies this zone, and secondly, deploys its military base there, regularly providing material and technical support, while not contributing to the delivery of food and medicine to the residents of Rukban. It is necessary to immediately take measures to resettle the camp”, she noted.

Last week, Foreign Policy magazine reported that the US was considering keeping some troops in its strategic base in southeastern Syria, al-Tanf, to "prevent Iran from establishing a ground line of communications from Iran through Iraq through Syria to southern Lebanon in support of Lebanese Hezbollah".

© Sputnik / Andrey Stenin
France to Repatriate 130 Daesh Fighters Detained in Syria - Report
The development came a month after US President Donald Trump declared victory over Daesh* and subsequently announced a full and immediate troop pull-out from the Arab Republic.

The US-led coalition has been carrying out airstrikes against what has it referred to as Daesh targets in Syria without either a UN mandate or Damascus’s authorisation.

The Syrian government has repeatedly denounced their military presence as illegal, demanding that the American forces leave the country and withdraw from the al-Tanf base.