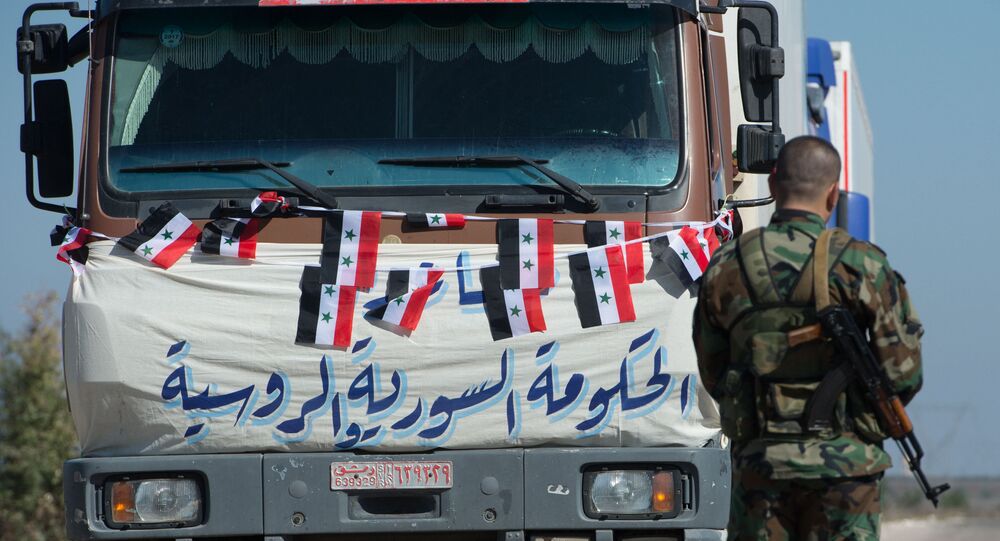 MOSCOW (Sputnik) - The Kurdish militia units on Wednesday blocked a convoy of humanitarian aid sent by the Syrian authorities to the city of Hajin, forcing the vehicles to turn around, Lt. Gen. Sergei Solomatin, head of the Russian Center for Syrian Reconciliation said.

According to Solomatin, Damascus, together with the Syrian Arab Red Crescent Society organized on 30 January shipment of humanitarian aid to Hajin, located on the eastern bank of the Euphrates River.

"A column of humanitarian aid consisting of 10 trucks carrying bottled water, food and medical supplies, as well as hygiene products and basic necessities, was blocked in the area of the settlement of Al-Husaynia by Kurdish units from the US-backed Syrian Democratic Forces," Solomating said at a briefing.

Solomatin specified that Kurdish militia forced the convoy to turn around, obeying strict orders by the US military officials.

The Arab-Kurdish detachments of the Syrian Democratic Forces (SDF) have been engaged in a military operation against the Daesh in the terrorists' last outpost in the city of Hajin. The US-led coalition has been carrying out frequent airstrikes on Hajin and nearby villages under the pretext of assisting the SDF in its anti-Daesh fight.

© AP Photo / Militant website
Iraqi Scientist REVEALS How He 'Helped' Daesh Make Chemical Weapons
While the SDF is one of the parties engaged in conflict with the Syrian government — Damascus considers its actions as illegal — it is determined to fight off the remaining strongholds of terrorism in the country, just as the central government is.

A total of 2,000 people currently stay in eastern Syrian city of Hajin held by the Daesh terrorist group, according to Andrej Mahecic, the spokesperson of the UN High Commissioner for Refugees (UNHCR).

Mahecic has also voiced UNHCR concerns over "mounting civilian casualties" and "large-scale civilian displacement" triggered by resumption of clashes and airstrikes in Hajin, located in the Deir ez-Zor province.

According to the UNHCR, around 25,000 people have left Hajin over the past six months.