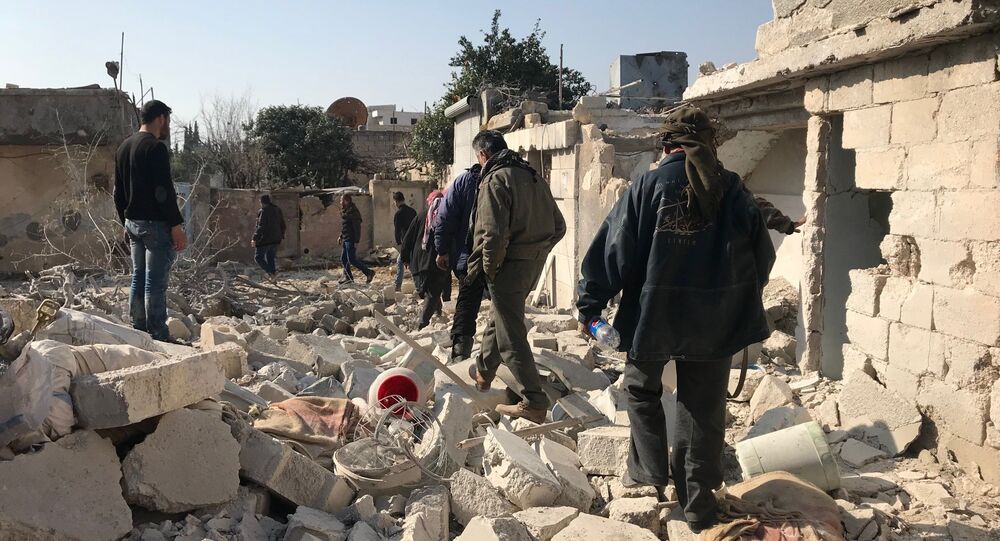 Turkish President Recep Tayyip Erdogan recently recalled the 1998 agreement with Damascus, saying the deal allows Ankara to enter Syria when it is threatened.

The Syrian Foreign Ministry reacted to the recent statement by Erdogan concerning the 1998 Adana agreement, accusing Turkey of violating the accord since 2011 by supporting terrorists and occupying Syrian territory, SANA reported, citing a representative in the ministry.

"Syria confirms that it is in compliance with the Adana Interstate Agreement on Combating Terrorism in all its forms and all agreements related to it, but the Turkish regime has been violating the agreement since 2011 up to now by sponsoring and supporting terrorism, training militants and making it easier for them to go to SAR, or through the occupation of Syrian territories with terrorist groups it controls it or directly with the help of the Turkish Armed Forces," Syrian state television quoted a source in the ministry as saying.

© AFP 2021 / Delil SOULEIMAN
Washington 'Created a Nightmare' for Ankara: US Should Protect Turkey From Syrian Kurds, Slow Troop Exit - Senator
The ministry called on Ankara to "activate" the 1998 agreement, leaving the boundary territories in the state as they were before the beginning of the war in 2011.

READ MORE: Erdogan: 1998 Deal Allows Turkey to Enter Syria When it is Threatened

The Adana agreement was signed by Syria and Turkey on October 20, 1998 and aimed to restore bilateral relations following a crisis that arose due to Syria sheltering militants linked to the Kurdistan Workers' Party (PKK), which is officially listed as a terrorist organization in Turkey.

According to the agreement, Syria had to halt PKK activities on its territory, including a ban on logistical, material and financial support for the group on its territory, as well as prohibit establishing camps, shelters and facilities for training militants. Turkey, in turn, gained the opportunity to take appropriate measures to deter the terrorist threat.

Tensions between the two sides of the Adana agreement recently flared up, as Turkey mulled over a new operation against Kurdish-held areas of Syria after its military success in Afrin.

Damascus is negotiating with the Kurds, who are seeking support amid Ankara's military plans.

Erdogan, in turn, recently emphasised that Turkey should have control "in the field" and is not open to other suggestions.

Prior to that, Recep Tayyip Erdogan announced that the Turkish Army was ready to start an offensive against Kurdish forces on the eastern bank of the Euphrates at the earliest opportunity. However, after talks with US President Donald Trump, who informed his Turkish counterpart of plans to withdraw US troops from Syria, Erdogan shelved his plans, saying that the offensive would be launched only after the US forces' complete pullout.