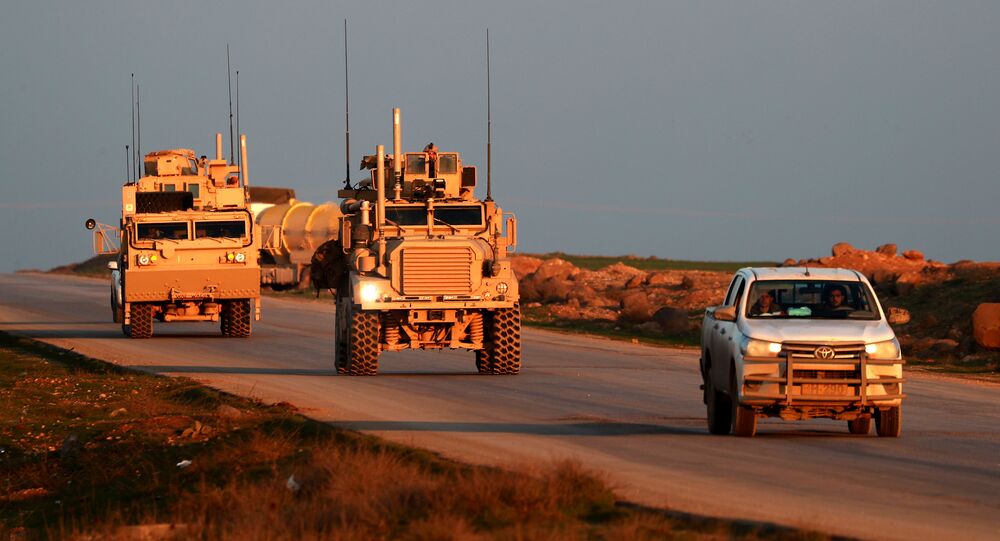 The report comes amid the beginning of US troops' withdrawal from Syria, which was announced by President Donald Trump in December 2018, when he also declared victory over the terrorist group Daesh*.

A video which allegedly shows the US deploying trucks loaded with weapons and logistical equipment to Syria, has emerged on the Internet. The authenticity of the footage has yet to be confirmed.

Iran's Press TV reported that in the video, a column of more than 100 vehicles ostensibly coming from Iraq's Kurdistan Region enters Syria to the east of the Euphrates.

According to Press TV, the weapons were deployed to US military bases in the cities of Hasakah, Raqqa and Aleppo.

READ MORE: US Starts Withdrawal of Military Hardware From Syria 'for Security Reasons'

The alleged deployment comes after President Donald Trump tweeted in mid-January that US troops in Syria are starting their pullout "while hitting the little remaining ISIS [Daesh] terrorists from many directions".

In December 2018, Trump announced plans to withdraw roughly 2,000 US troops from Syria within the next several months, in a move that he claimed can be explained by the fact that American forces had implemented their task of obliterating Daesh in the Arab country.

At the same time, the White House pledged that the US-led international coalition's fight against terrorism would continue.

© AFP 2021 / Romeo Gacad
Former US Envoy Says ‘There Is No Plan’ After US Troop Withdrawal In Syria
The troop withdrawal decision was slammed by some US officials and prompted two resignations — US Secretary of Defence Jim Mattis, who announced that his views were no longer aligned with Trump's, and Brett McGurk, special presidential envoy for the US coalition in Syria.

A US-led coalition of over 70 member-nations has been conducting military operations against the Daesh terror group in Syria and Iraq. Coalition strikes in Syria are neither authorised by the government of President Bashar Assad nor by the United Nations Security Council.