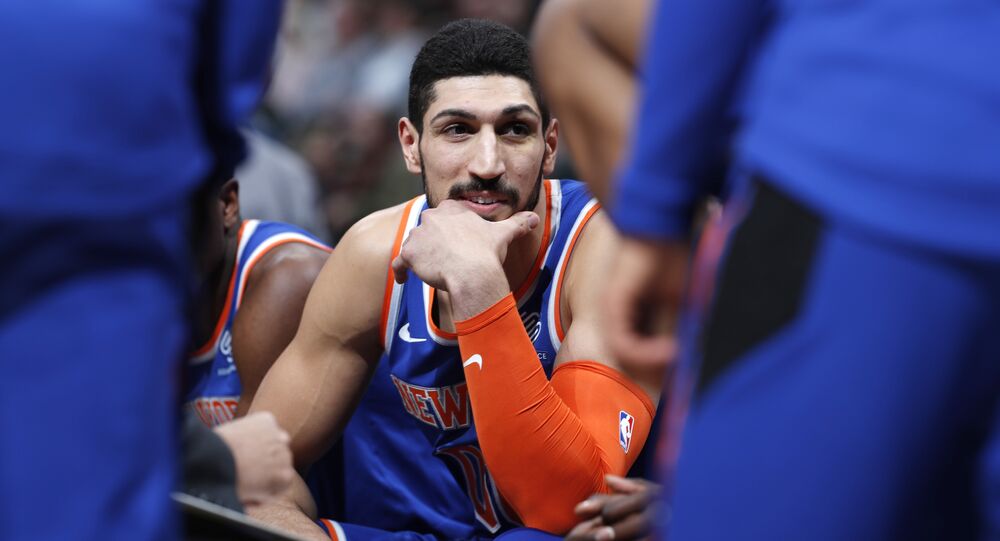 Turkish prosecutors submitted paperwork this week for the extradition of Turkish NBA player Enes Kanter, alleging that the New York Knicks center belongs to the Gülen movement, which Ankara blames for the 2016 coup attempt in Turkey.

Additionally, Turkish media outlets are reporting that prosecutors are seeking an Interpol "Red Notice" for Kanter, which essentially requests that the basketball player be located and be provisionally arrested pending his extradition.

According to the Daily Sabah, prosecutors wrote in their extradition request that Kanter had provided funding for the organization, which is headed by US-based cleric Fethullah Gülen, a one-time ally of Turkish President Recep Tayyip Erdoğan. Both requests were submitted to the Turkish Ministry of Justice.

The Wall Street Journal reported Wednesday that the two requests stemmed from past complaints filed by Erdoğan and former NBA player Hidayet Turkoglu over alleged insults made by Kanter via social media in 2016.

Kanter reacted to the reports on social media, telling his hundreds of thousands of followers on Twitter that the "Turkish Government can NOT present any single piece of evidence of my wrongdoing." He later added that he's never even been cited for a parking violation in the US and that he has "always been a law-abiding resident."

​In a follow-up tweet, he jokingly wrote that "the only thing I terrorize is the rim."

An outspoken critic of Erdogan and supporter of Gülen for several years now, Kanter referred to the Turkish leader as "the Hitler of our century" after Turkey issued a warrant for his arrest in May 2017 and canceled his passport while he was on a flight to Romania. Although he was briefly detained at the time, Kanter was later allowed to fly back to the US.

"It was scary because there was a chance they might send me back to Turkey, and if they sent me back to Turkey, probably you guys wouldn't hear a word from me the second day," Kanter told reporters in 2017. "It would've definitely gotten really ugly."

In 2018, Kanter's father, Mehmet, was indicted and charged with "membership in a terror group." The Andalou Agency reported at the time that prosecutors were looking at a prison term of five to 10 years. The charges came months after he was detained in 2017 for roughly five days over his suspected links to the Gülen movement. Kanter's family still lives in Turkey.

Earlier this month, Kanter announced that he would not be traveling to London for a regular-season NBA game against the Washington Wizards because he feared that supporters of Erdogan would try to kill him.

"There is a chance I could get killed out there," he told journalists. "It's pretty sad that all the stuff affects my career and basketball, because I want to be out there and help my team win."

When asked about the likelihood of such an attempt taking place, Kanter doubled down, stressing that it would be fairly "easy" since "there are a lot of spies out there." Kanter has previously stated that it's only safe for him to travel in the US and Canada.

Turkey has also submitted an extradition request to US officials for Gülen, who is currently residing in the US state of Pennsylvania, however, that plea was rejected for not meeting the legal standard for such a request, The Wall Street Journal reported.

Since the failed coup, Erdogan has largely consolidated power and launched a crackdown on political dissidents. Various Turkish outlets have been targeted, and thousands of civil servants have been dismissed from their respective posts and jailed over suspected ties to Gülen.

Trump: Extradition of Turkish Cleric Fethullah Gulen Not Under Consideration

Ecuadorian Court Approves Extradition of Facebook "Founder" to US - Reports