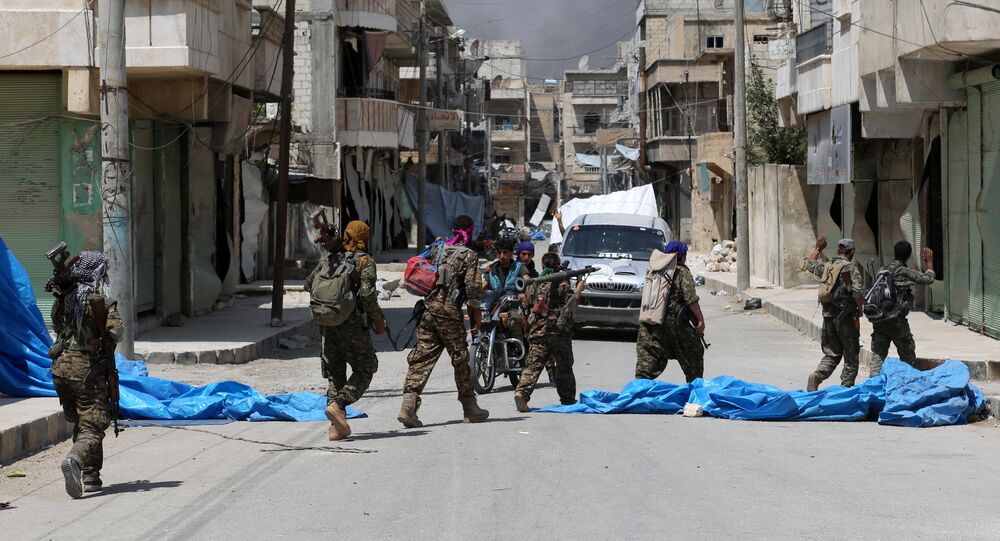 Turkish President Recep Tayyip Erdogan stated that the terror attack in the Syrian city of Manbij which took place earlier in the day has claimed the lives of at least 20 people, including five US soldiers.

Commenting on the latest terror attack in the Syrian city of Manbij, Turkish President Recep Tayyip Erdogan noted that he did not believe it would impact the Trump's decision to withdraw troops from the country.

"According to my information, five US servicemen were killed in the terrorist attack, which claimed 20 lives. The attack was organized by the IS [Daesh*] group. Perhaps they want this event to influence the decision of [US President Donald] Trump to withdraw troops from Syria. This may influence. However, if this happens, it will be a victory of the IS," Erdogan told reporters.

According to the local military council, the blast occurred near a patrol of the international coalition in the city. Eyewitnesses in Manbij told Sputnik that the explosion took place near a cafe where the leaders of the council and guests from a delegation, "whose identity has not yet been established", had gathered.

Shortly before that, a source close to the military council of the city told Sputnik that the death toll in the terrorist act in Syria's Manbij has risen to 16, at least 18 civilians were injured.

"The death of three American soldiers and 13 civilians has been confirmed. Eighteen civilians were injured as a result of the attack today," the source said.

Earlier, Al Jazeera reported that six civilians were killed and 19 others wounded as a result of an explosion in the centre of the city of Manbij, while a US military patrol was passing. The death toll was later revised up to 9 killed, according to the broadcaster.

Daesh* has reportedly claimed responsibility for the attack.

Two US soldiers and a fighter of the Manbij Military Council were killed by the explosion in Manbij City. The perpetrators are believed to be sleeper cells of Turkish-backed jihadistshttps://t.co/49Hh6dZ1GA pic.twitter.com/npNcnPQCSH

Casualties Among US Military Personnel

A spokesperson for Operation Inherent Resolve confirmed the casualties among American military personnel.

"US service members were killed during an explosion while conducting a routine patrol in Syria today. We are still gathering information and will share additional details at a later time, " the statement said.

As a US official, cited by Reuters, stated earlier, the explosion claimed the lives of 4 US soldiers, while 3 others were wounded. A military helicopter has allegedly landed near the scene in order to rescue survivors.

© REUTERS / Omar Sanadiki
Russian Military Police Begin to Patrol Manbij Area in Syria's Aleppo Province
According to a source close to the Manbij Military Council, a US military personnel team arrived in the city to conduct an investigation.

Meanwhile, US President Donald Trump has been briefed on the situation.

"The President has been fully briefed and we will continue to monitor the ongoing situation in Syria", White House spokesperson Sarah Sanders said in a statement, commenting on the situation.

The city of Manbij in the northern province of Aleppo has switched hands three times since the civil war began in 2011. With US troops withdrawing from the country and Turkish forces concentrating at the Syrian border, the US-backed Kurdish People's Protection Units (YPG), which was in control of the area at the end of December, invited Syrian government forces to the city.