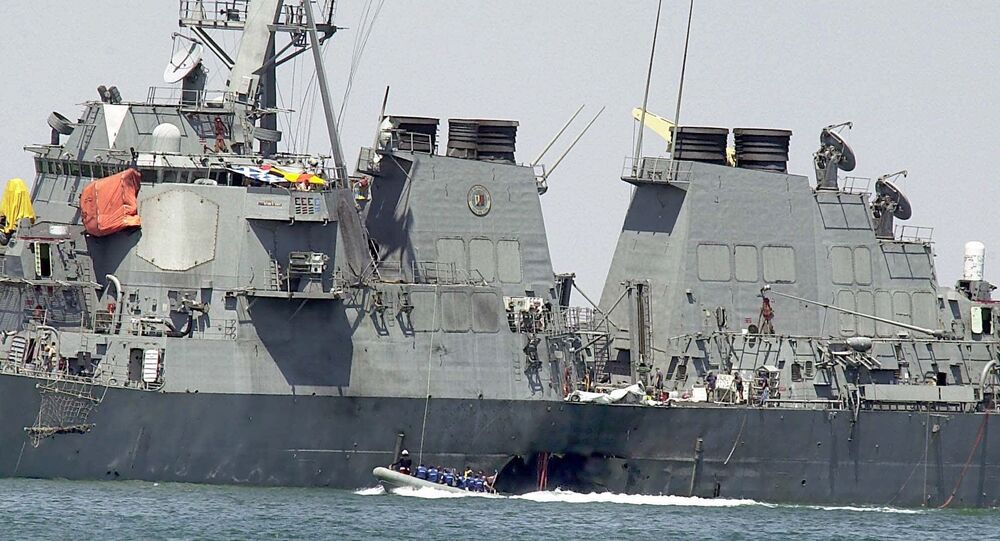 Jamel Ahmed Mohammed Ali Al-Badawi, an al-Qaeda operative who helped mastermind the terrorist attack on the US Navy destroyer USS Cole while it was docked in Aden, Yemen, in 2000, was killed Friday in a US airstrike, according to reports.

© Flickr
Watchdog Slams US Decision to Halt USS Cole Trial as 'Farce'
It wasn't revealed whether the operation was carried out by the CIA or by US military forces, only that the airstrike was the result of a joint US military and intelligence operation, a US administration official told CNN.

The source noted that Badawi was driving alone in a vehicle in Yemen's Ma'rib Governorate, east of the capital of Sana'a, at the time of the strike.

The FBI had listed Badawi among its most wanted terrorists since 2006, promising a $5 million bounty for information leading to his capture or death.

1) Jamal Al-Badawi—the Yemeni #alQaeda operative & mastermind of the 2000 USS Cole Bombing & attempted USS Sullivans attack—reportedly killed in a US drone strike in #Yemen (unclear if in al-Bayda or Ma'rib governorate). He was among US gov’s most wanted https://t.co/v9jTYH5iQ0 pic.twitter.com/rR8F51VqTA

On October 12, 2000, a small boat loaded with explosives crashed into the side of the Arleigh Burke-class destroyer USS Cole, killing 17 sailors and wounding another 39, leaving a gaping, 40-foot hole in the side of the ship.

Badawi, along with Abd al-Rahim al-Nashiri, Abu Ali al-Harithi and Fahd al-Quso, were named by the incoming George W. Bush administration as conspirators who organized the attack on behalf of al-Qaeda, which claimed responsibility. Tawfiq bin Attash has also been accused of organizing the attack.

Harithi and Quso have both been killed by US forces, while Nashiri and Attash have been held by the US in the Guantanamo Bay detention camp since their capture in the early 2000s. Nashiri and Attash are some of the prison's highest profile detainees, whose torture the Bush administration repeatedly defended.

Badawi was the first to be caught, being arrested and detained by Yemeni authorities just two months after the attack. However, he escaped from a Yemeni prison in April 2003, was recaptured in March 2004 and again escaped in February 2006. He subsequently surrendered to Yemeni authorities in October 2007, but was freed under certain conditions, including a pledge of allegiance to Yemeni President Ali Abdullah Saleh. The New York Times reported that he helped Yemeni authorities track down five other wanted al-Qaeda operatives.