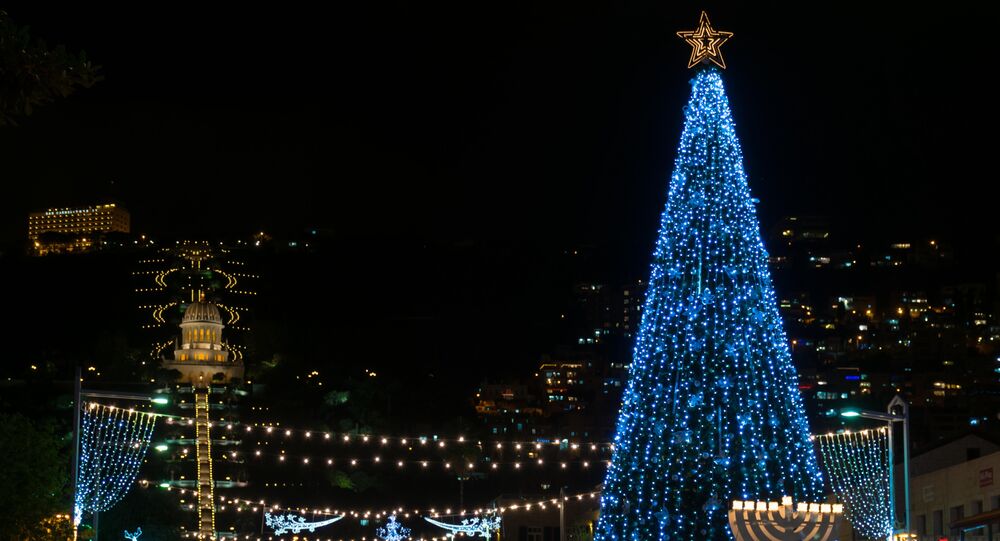 New Year is a celebration when families gather at night on 31 December to share the joy of entering the coming year, exchanging presents and looking forward to the new opportunities and happiness that the year will bring. The traditional symbols are the Yulka tree (Spruce Tree), Ded Moroz (Grandfather Frost) and Snegurochka (Snow Maiden).

Debate over whether New Year (Novy God) is a celebration or an ordinary day has once again arisen in Israel, according to the Jewish People Policy Institute (JPPI). This time it has taken place in the Israeli city of Ashdod, whose deputy mayor, Avi Amsalem, has criticized the New Year's tree, saying that the tree "is meant to harm anyone who defines himself as a Jew".

"This has no connection to religion", The New York Times cited Mr. Kaminker, an owner of a store in Israel that caters to those Israelis who celebrate New Year, as saying.

"You won't find any Marias or crosses here", Kaminker said, describing his shop.

© Sputnik / Vladimir Sergeev
Better Late Than Never: 'The West Came to Perceive Russia as a Force to Be Reckoned With'
Among those who have criticized Kaminker's store is Nachman Zilber, an ultra-Orthodox Jew, who stated that "there were years when our people were slaughtered on such dates", meaning December 31 and January 1, the NY Times reported.

The city of Ashdod, where Kaminger's store is situated, came into the spotlight this year after the ultra-Orthodox deputy mayor, Avi Amsalem, reportedly slammed the New Year's tree, saying that the trees, as a symbol, offend "the feelings of the traditional residents of the city and indirectly harm the business owners", according to the newspaper.

Earlier, an "Israeli Novy God" campaign was introduced by a Russian-Israeli group. The media campaign was aimed at showing Israelis that New Year is not related to any sacrilegious rituals or heavy-drinking, but rather New Year is about family and good intentions.

© Sputnik / Maxim Blinov
Starry Sky: Moscow Transforms for the New Year
The initiative is ongoing and suggests all Israelis who want to understand the tradition join the celebration.

One in five Israeli Jews (20 %) celebrates New Year in Israel, while around 38% are not aware of the celebration, according to the results of a recent survey by the Jewish People Policy Institute.