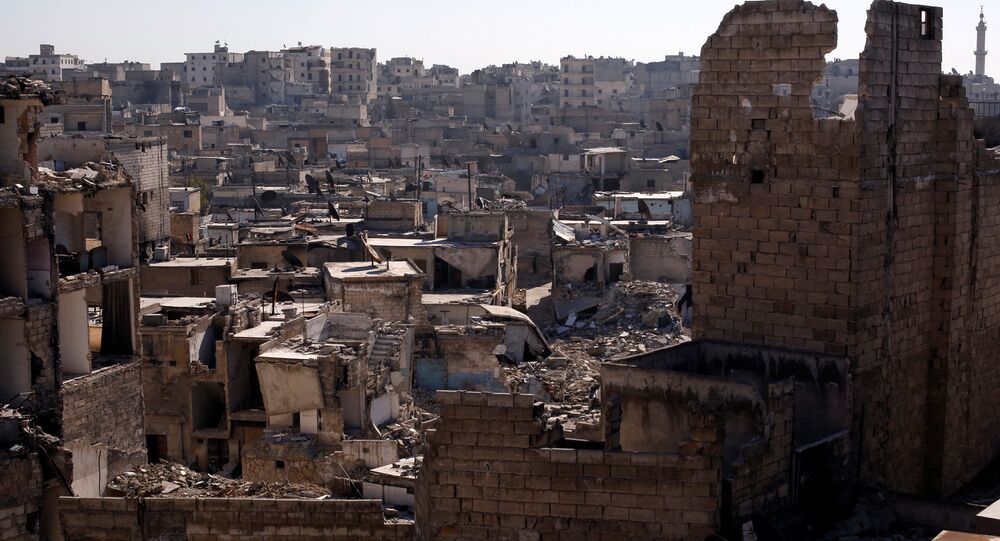 'Our People Couldn't Be Broken': Syrian Aleppo 2 Years After Liberation

ALEPPO (Sputnik) - The Syrian northern city of Aleppo on Monday marks the second anniversary of its victory over terrorism. Exactly two years ago the country’s most populous city was liberated from militants.

A Sputnik correspondent has visited Aleppo on the eve of the anniversary and saw that many neighbourhoods, including the historic centre, still lie in tatters, but the number of beautiful facades is increasing day by day.

The same thing is happening with the industry, which Aleppo has always been famous for: there is a lot of activity in almost every basement, as the locals produce soap, hookahs, and clothes under luxury brands to sell them both in Syria and abroad.

End of the End
Aleppo two years ago. pic.twitter.com/BRg7wUDmjG

​Coming Back to Life

© REUTERS / Rodi Said
US Pulling Troops Out of Syria Due to Failed MidEast Policy - Syrian Ambassador
The city administration decided to hold the main events to mark the liberation day in al-Assad Sports Arena. High-level representatives of a number of confessions, officers of the Syrian army and employees of the Russian Center for Reconciliation of Opposing Sides, who played an important role in the liberation of eastern Aleppo in 2016, arrived in the city at the governor’s invitation.

Thousands of spectators gathered at the arena to watch the show. Young artists opened the show with their dance performances, followed by the local teams, who have showcased their sports skills. Men on wheelchairs with the words "For you, my Aleppo" written on them, played an exhibition basketball match. But the most impressive was the football match between teams of players who lost their sight. The young men determined the direction of the approaching ball by its sound.

"Everything you see here shows that our people could not be broken, we are alive and we enjoy our life," spokeswoman for Aleppo’s Ministry of Information Lyama Kayali said.

Old friends have invited us to take a walk around the city, to share our common history in the days of martial law.

We Cannot Bring Friends Back

The old town is located within walking distance from the arena. Mohammed, a militia commander, who was the conduit for Sputnik journalists in the combat zone, invited us to walk to the square, where there the clock tower sits. The images of this tower used to be on postcards. It has already been restored, and the city clock is working properly now.

The hotel next to the clock tower was one of the first buildings restored after the liberation. Beautiful, illuminated, there is a spacious hall with heavy chandeliers as well as restaurants with world cuisines for various preferences — everything is different from two years ago. Back then the hotel lobby walls were black from carbon dust and the rooms were empty and ransacked.

We did not want to eat, so we decided to drink zhourat, an Arabic herbal tea. The conversation was about the future of Syria, politics and war.

"So you will be drinking zhourat?" the girl asked and did not leave. She stood there and looked at us for a few seconds. "I’m Haifa," she continued indistinctly.

© AP Photo / APTV
Order to Pull Out US Troops From Syria Signed - Reports
Only then we have understood that she was the bride of our mutual friend Hamad, who died in Deir ez-Zor a year ago. The guy was a graduate of a Russian university. At the beginning of the war, he returned to Syria and invested all his money to support the Christian militia. In 2015, we met in Latakia by sheer coincidence and became friends.

The militia commander by the name of Mohammed offered him to work together against a common enemy, despite the fact that they had different religions. Their group received permission and all documents for joining the fifth corps of regular troops. In October 2016, Hamad, then the commander of the Christian militia, died near Deir ez-Zor during clashes with the Islamic State terrorist group (banned in Russia).

"Come sit with us, daughter, let’s talk. How are you? Thank God, I see, that you got a job," Mohammed said, moving up a chair.

There were no other people besides us in the restaurant, so the girl has agreed.

"Commander, did you see Hamad’s body? They searched for him for more than two weeks. They did not allow me to go into the morgue, but I have managed to negotiate it. Everything that they showed me was bones and clothes, there was nobody. I do not believe that he died," Haifa said through her tears.

Mohammed poured her a glass of water.

"We cannot bring back our friend and we need to go on with our lives. We are very happy to meet you on this significant day, on the day of liberation of our city. This is fate. Our Hamad dreamed of free Aleppo, he repeatedly spilled his blood and did a lot to win," the commander said, trying to comfort the girl.

She struggled to calm down and left, apologizing. Mohammed offered to leave and not to provoke painful memories by our presence.

The conversation about our mutual friend continued for a few more hours until we wandered into the Midan quarter, where Mohammed lives and Hamad used to stay.

"Look at how our quarter has changed. Come, I will show you what is going on in Aleppo. The war is almost over, and we are returning to our business," our fellow soldier said, changing the subject.

During the war, the Midan quarter was adjacent to the territories occupied by terrorists. Now the picture has changed. Mohammed led us to a small workshop, which he was particularly proud of. A smiling Armenian named Serge was sewing an inscription Gucci on each item.

"This is a big order for Iraq. Ignore the inscription, this is Aleppo’s Gucci. Serge just likes the word, so he convinced himself that this model looks more interesting with it. And we do not really care," the militiaman explained with a smile.

A small factory works almost around the clock, without a break. Serge will probably decide which inscription to choose for the next batch tomorrow when he wakes up.

© REUTERS / SANA
UK Backs US' Claims on November Chlorine Attack in Aleppo
Mohammed and his partner each have a fifty percent stake in the "denim" business. Next year, the first one intends to rent or buy another room and open his own factory.

His relative across the street started the production of the keffiyeh. Despite the fact that it was already 11 p.m. [9 p.m. GMT], the production did not stop. The guys were in a hurry to make several thousand pieces of red and black scarves of good quality. According to the owner, the keffiyeh would go to the countries of the Gulf States. It seemed that people in the quarter do not sleep at all. Every other basement smelled like furniture polish and wood chipper. The batteries for the cars were filled, olive oil soap and hookahs were made in the garages between the houses.

The best part of the walk was the visit to the night market. It is a very ancient tradition to open shops at night. According to the locals, it was not so hot at night, and people could safely walk and buy what they wanted.

"A guest is always a great honour for us. Try our sweets, we just have cooked them," the owner of one of the shops said, handing us some sort of a small croissant in sugar syrup.

Mohammed’s cousin met us 10 meters (33 feet) from the master of sweets. He owns a falafel shop.

"If you refuse to try it, I will be offended by you and Mohammed," the commander’s relative said with a smile and handed us rissoles with traditional sesame paste sauce, decorated with fresh and fragrant parsley. The gastronomic tour did not end there. As you pass along the colourful shops with vegetables and fruits, your bag is gradually filled with apples, oranges and other fruits.

"All of these grow here, in Aleppo. We have a self-sufficient province, there is agriculture and production. You should take it and do not refuse. Do not hurt the guys, they are pleased to let you try what they have grown with their own hands. I think it is unlikely that something grows in Moscow in December," Mohammed said and, smiling, threw one potato into his bag.

It turned out to be an eventful day. Only a couple of hours passed, but it seemed like two years. For Aleppo, it is only the beginning of a new life and fulfilment of hopes. It will take a few more years, so that this city could fully welcome tourists, as it did before, and fully restore its historical right to be called Syria’s economic capital.

Chemical Attack in Aleppo: What May Happen Next?