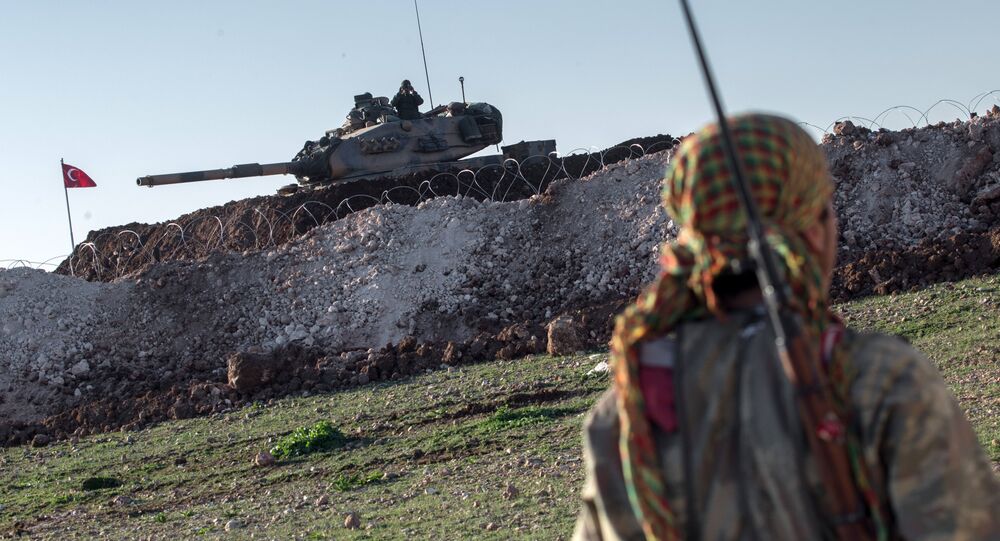 MOSCOW (Sputnik) - The announced withdrawal of the US military from Syria will come as a hard blow for the Kurdish-led militia operating in the northeast of Syria, whose only sensible option now is to return the lands that they have seized back under control of the legitimate Syrian government, Syria's Envoy to China Imad Moustapha told Sputnik.

"The decision to evacuate [US troops from Syria] would constitute a major blow to the separatist Kurdish movements in northeast Syria that have foolishly believed the US troops there would be protection and guarantee to replicate the Iraqi Kurdistan model in Syria. Now they have to face reality, either they come back to their senses, and re-integrate that part of Syria with the rest of the country… or they will become a prey to [Turkish President Recep Tayyip] Erdogan's most vile schemes against them and the rest of Syria," the ambassador said.

The diplomat also noted that Damascus had never had any doubts that foreign states that had illegally deployed their troops to Syria would eventually come to realize that it had become too expensive to sustain their military presence in the country and would have to leave.

"However, we have no trust whatsoever in any US statement, or policy. The disastrous US policies in our region have taught us that US policies can fluctuate, change, reverse or reincarnate in other forms," Moustapha added.

US-Backed Syrian Democratic Forces have reported that the withdrawal of American troops would allow a revival of Daesh, with consequences for regional and international stability.

The statements come after US President Donald Trump announced that the United States would withdraw its troops from Syria because the Islamic State terrorist group (outlawed in Russia), which was the only reason for the US presence in the Arab country, had been defeated in Syria. White House Press Secretary Sarah Sanders said in a statement that Washington had already started the process of withdrawing the troops, of which there are about 2,000.

READ MORE: Daesh Has Not Been Wiped From Map in Syria — French Defence Minister

The United States has been active in Syria since 2014, when the US-led international coalition launched its counterterrorism campaign in Syria, without securing permission either from the United Nations Security Council or Damascus.

Turkey, in turn, launched Operation Olive Branch in the northern Syrian city of Afrin in cooperation with the Free Syrian Army opposition forces, against the YPG, which is regarded by Turkey as an affiliate of the Kurdistan Workers' Party (PKK), listed as a terrorist organization by Ankara. As a result of the operation, the city fell under control of Turkish forces.

Washington to Continue to Pressure Damascus, Tehran After US Troops Leave Syria