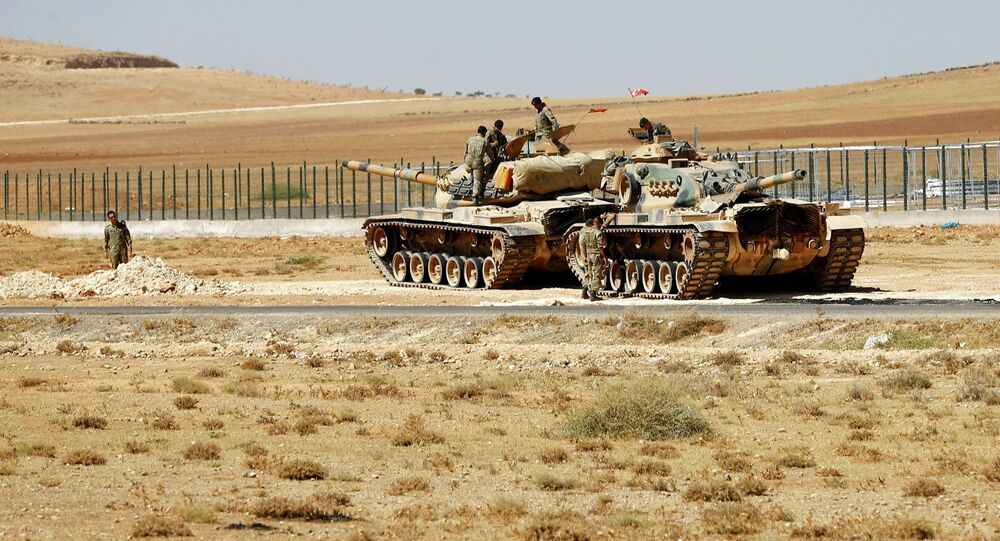 The warning comes after Turkish President Recep Tayyip Erdogan said that Ankara was ready to launch an operation in Syria's Manbij against the Kurdish People's Protection Units (YPG) "in a few days" if the US does not order them to withdraw from the area.

US intelligence and diplomatic officials have urged the Free Syrian Army (FSA) and National Coalition for Syrian Revolutionary and Opposition Forces (SMDK) not to support the planned Turkish military operation against the Kurdish People's Protection Units (YPG) east of the Euphrates River.

Turkey's Anadolu news agency cited a number US officials as saying in a message that any participation by SMDK or FSA in the operation is "an attack on the United States and the Coalition Forces", which may lead to "direct confrontation" with them.

"That will fully destroy" the relations between the US, SMDK and FSA, Washington warned.

The US officials also recalled the interaction of the US military with the Syrian Democratic Forces (SDF), insisting that the group "cannot be attacked without aggression and confrontation with Coalition Forces and US forces and advisers."

"When elephants dance, you must stay away from the dance floor," they noted.

The remarks came after Turkish President Recep Tayyip and his US counterpart Donald Trump discussed Ankara's future military operation in eastern Syria over the phone.

Erdogan shared with Trump his concerns over the YPG's growing military presence, supported by the United States, as the two leaders agreed to coordinate military actions on the Turkish-Syrian border.

Earlier, the Turkish President signalled Ankara's readiness to launch an operation against the YPG "in a few days" if the United States does not withdraw them from the area.

The past few years have seen friction emerge between Turkey and the US, in part due to Ankara's concerns over US support for the YPG, viewed by the Turkish authorities as an affiliate of the Kurdistan Workers’ Party (PKK), blacklisted as a terrorist organisation in Turkey, the US and the EU.

© REUTERS / Baris Kadirhan/Depo Photos
Erdogan Vows to Eliminate PKK, YPG, PYD, Urges US to Refrain From Provocations: "Ankara Won't Put Up With It for Long"
Moreover, Ankara has repeatedly accused Washington of failing to fulfil its promises regarding the withdrawal of the YPG from Syria's Manbij, something that Turkey claims threatens its national security. Earlier this year, Ankara conducted an offensive against the Kurdish militia in Syria's northern border city of Afrin.

In late March, Trump announced that the US would be withdrawing from Syria "very soon", a statement that came at odds with previous remarks by senior Pentagon and State Department officials who said that US armed forces would preserve an open-ended presence in Syria.