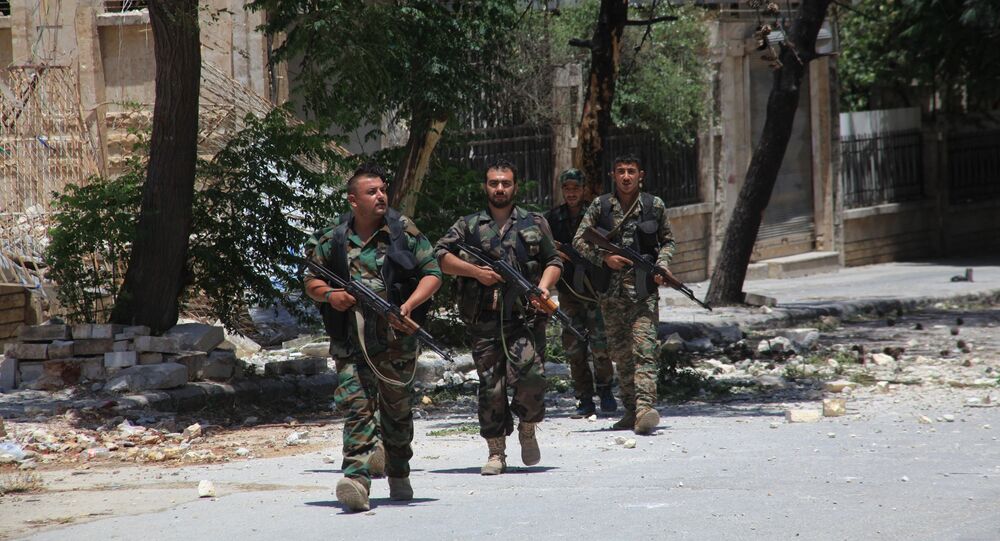 MOSCOW (Sputnik) - A Syrian serviceman was killed and another wounded during the shelling of Syria's city of Aleppo and province of Latakia by illegal armed groups, the Russian Defense Ministry’s Center for Syrian reconciliation said at a briefing on Sunday.

"Over the past 24 hours, militants have attacked settlements of Maan, Qibirah,Tal-Maraq and Qubeybat-Abu-al-Houda in Hama province, settlements Sandran (twice), Abu-Dali and the heights of Tal-Metvazi, Tall-al-Tout in Latakia province, as well as the northwestern, southwestern and western suburbs of Aleppo (four times) and the Zakhabiya and Sukkari districts in Aleppo. One Syrian serviceman was killed as a result of the attack at Aleppo, and one wounded as a result of attack against Sandran," the center said.

© AP Photo / Hassan Ammar
Russian MoD Has Undeniable Evidence of Chemical Shelling of Aleppo by Militants
According to the center, one humanitarian action has been carried out by the center in the province of Deir ez-Zor over the past 24 hours, with the residents of Khusham settlement having received 500 food sets.

The center added that Damascus continued to work on amnesty for those, who avoided military service, in line with the presidential decree dated November 9. Thus, over 15,500 people have been granted amnesty as of December 8, the center added.