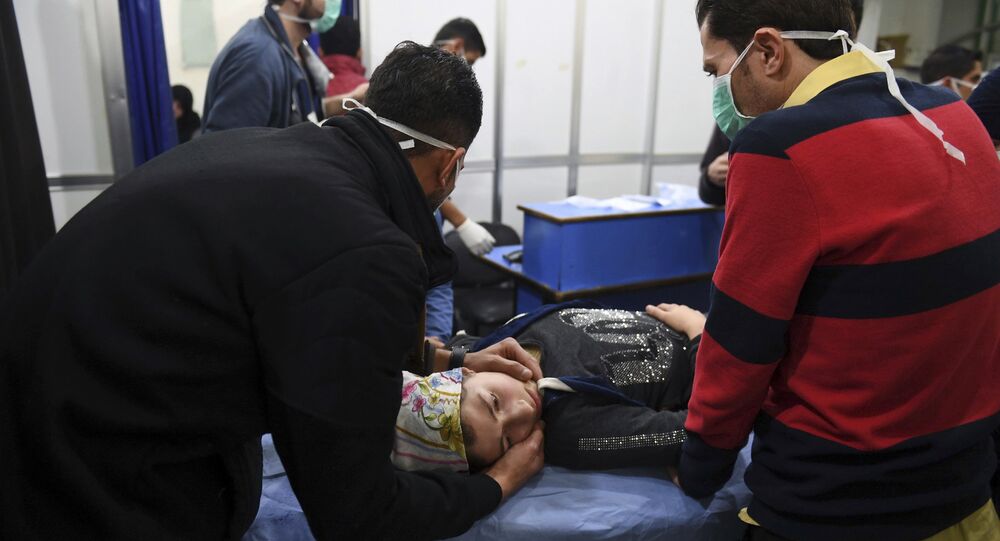 DAMASCUS (Sputnik) - The number of civilians injured in an attack by militants using chlorine-filled shells on residential areas of Syria's Aleppo has reached 65 people, Syrian newspaper al-Watan reported on Sunday.

Sources at the ar-Razi hospital told the newspaper that by midnight local time (22.00 GMT on Saturday), 21 injured had been admitted, all hospitalized in the intensive care unit.

The head of the health department of the Syrian city of Aleppo, Ziad Haj Taha, earlier reported that 25 had been hospitalized to ar-Razi hospital and another 25 to Aleppo University Hospital. Lebanese broadcaster Al Mayadeen has reported about 100 injured in the attack.

On Saturday, militants from terrorist groups fired chlorine-filled shells at neighborhoods of al-Khalidiye and Al Zahraa as well as Nile Street. At least four children were hospitalized with asphyxiation and other symptoms typical of poisoning.

© AP Photo / Hassan Ammar
Dozens of Civilians Hurt as Militants Shell Aleppo with Chlorine Projectiles - Reports
Aleppo was liberated by Syrian government troops from militant and terror groups in 2016 but militants continue to shell the city from positions in the suburbs.

Earlier, Russian Defense Ministry spokesman Maj. Gen. Igor Konashenkov said that terrorists of the Islamic Party of Turkestan had transferred 20 tanks with 10 liters of chlorine each to Syria on October 27.