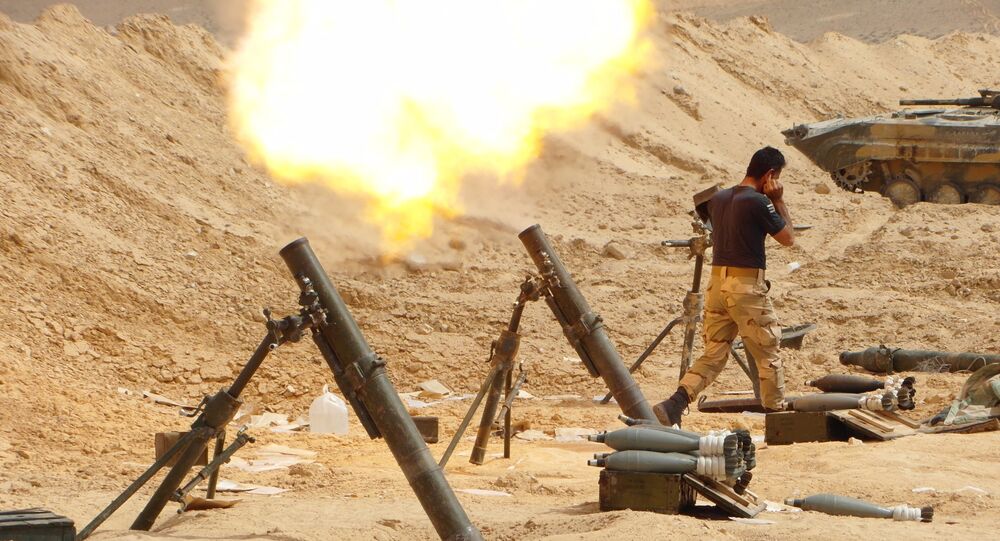 "The Syrian army responded to the shelling of militants, attacking the positions from which the shelling was carried out, militants suffered significant losses," the source said.

© AFP 2021 / GEORGE OURFALIAN
Aleppo Governor Says Chlorine Attack Proves Militants Posess Chemical Weapons
On Saturday, militants from terrorist groups fired chlorine-filled shells at neighborhoods of al-Khalidiye and Al Zahraa, as well as the Nile Street. At least four children were hospitalized with asphyxiation and other symptoms typical of chlorine gas poisoning. According to the latest reports of Syrian state television, 55 people were hospitalized.

The attack using poisonous gas was carried out by terrorists based north of Aleppo, the source asserted.

Aleppo was liberated by Syrian government troops from militant and terror groups in 2016 but militants continue to shell the city from positions in Aleppo’s suburbs.

The Russian Center for Syrian reconciliation warned earlier in November that militants were preparing new attacks with the use of chemical agents in Syria. In particular, the Russian Defense Ministry said that militants have transported 20 containers with toxic chlorine into Syria.

In October, Daesh terrorists attacked Nusra Front militants in the Syrian settlement of Al-Lataminah, killing at least two White Helmet staffers and seizing at least two canisters of chlorine, the Russian Defense Ministry said. According to the Russian Defense Ministry, the seized chlorine canisters were later transported to the south of Aleppo province and handed over to terrorists of the Daesh-linked Hurras al-Din group.