The incident occurred off the coast of the northern Lebanese city of Tripoli as Israel enforced a naval blockade of Lebanon trying to prevent Syrian naval forces from intervening in the fighting.

An Israeli submarine mistakenly fired missiles at the refugee ship in northern Lebanon in June 1982, killing 25 refugees and foreign workers on board, according to Israel's Channel 10. The channel earlier filed a petition to Israel's High Court of Justice against the censorship of its report on the incident.

The sinking, which was already admitted by the Israel Defence Forces (IDF), occurred during the so-called the First Lebanon War when the Israeli Gal-type submarine was taking part in "Operation Dreyfus,” aimed to stop Syrian naval forces from meddling in the fighting.

The Channel 10 claimed that the submarine launched two torpedoes at the commercial ship with 54 people on board, including Lebanese refugees; the vessel, which was en route to Cyprus, apparently tried to take advantage of a brief ceasefire and flee the area.

The submarine's captain, who was identified as Maj. A, mistakenly ordered the torpedo attack because he was ostensibly convinced that the ship was carrying Palestinian fighters.

"I looked carefully over the ship from end to end, and I saw there were no women or children on board," Maj. A. was cited by Channel 10 as saying.

READ MORE: Lebanon Plans to Start Offshore Drilling in 2019 Amid Dispute With Israel

He said that he continued to monitor the ship as it sank, and that neither children nor women were seen. He added that he kept watching "for two hours, until darkness had completely fallen."

Ten years later, the Israel Defence Forces launched an investigation into the incident which finally ruled that "it was not a war crime and there was no misconduct", adding that "there is no place for legal action."

Lebanon has no diplomatic relations with Israel where it is seen as an "enemy state." 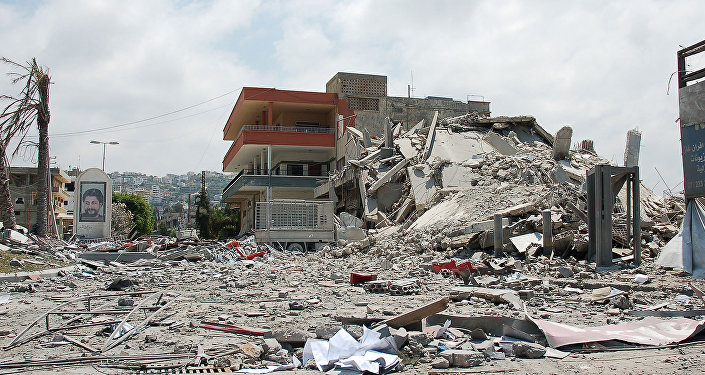 © CC BY 2.0 / Masser / Building bombed by Israeli forces in Ghaziyeh
Israel Sees No Difference Between Lebanon, Hezbollah - Senior IDF Officer
The conflict between the two countries stems from a long-running territorial dispute over continued Israeli control of the Shebaa farms, a slice of land at the eastern end of the Blue Line near the Golan Heights occupied by Israel since 1967.

Lebanon lays claim to the Shebaa Farms, but the UN ruled that they belong to Syria. Israel, in turn, insists that it will only withdraw from the area through future negotiations with Damascus.