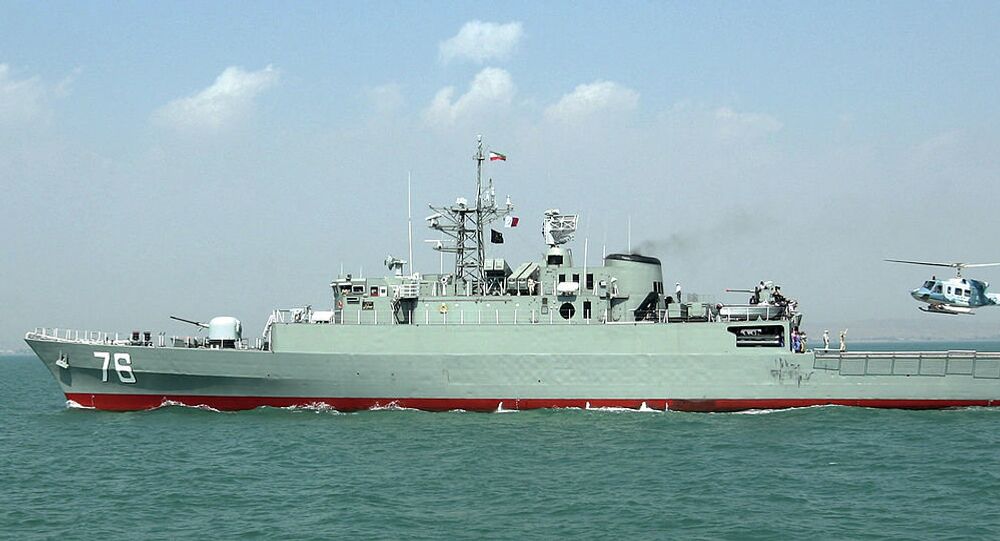 In recent years, the Iranian Navy has increased its presence in international waters to secure naval routes and protect ships and oil tankers from pirates.

The Iranian Navy will maintain its presence on the high seas in defence of the country’s national interests, a senior military commander said.

"So long as the presence of the Iranian Army's fleets is necessary to secure Iran's interests, the dispatch of the fleets to the high seas will continue," Army's Deputy Commander for Operations, Rear Admiral Mahmoud Moussavi, told the Islamic Republic News Agency (IRNA) on Sunday.

Moussavi added that Iran’s strong Navy would consistently maintain its presence on the high seas so that other countries do not take advantage of its absence.

© AFP 2021 / EBRAHIM NOROOZI / Jamejamonline
Iran’s Navy Assembles Near Mouth of Persian Gulf, US ‘Monitoring it Closely’
He also said that Tehran planned to send its naval ships to the Atlantic Ocean whenever necessary, just like it did in November 2016, when an Iranian naval flotilla sailed into the Atlantic for the first time after a stopover in South Africa.

Rear Admiral Moussavi mentions the great achievements made by the country since the 1979 Islamic revolution despite "cruel sanctions that have never succeeded in preventing our defensive progress”.

Iran has recently increased its naval presence in international waters in an effort to protect naval routes and ensure the security of merchant vessels and tankers.

The Iranian Navy has also been conducting patrols in the Gulf of Aden since November 2008 fully in line with international anti-piracy efforts, safeguarding merchant containers and oil tankers owned or leased by Iran or other countries.

During the Navy’s missions in international waters, it has prevented a number of attacks on Iranian and foreign tankers.

Iran, which in recent years has seriously upgraded its military potential attaining self-sufficiency in producing important military equipment and hardware, insists that its military poses no threat to other countries and is merely based on the doctrine of deterrence.