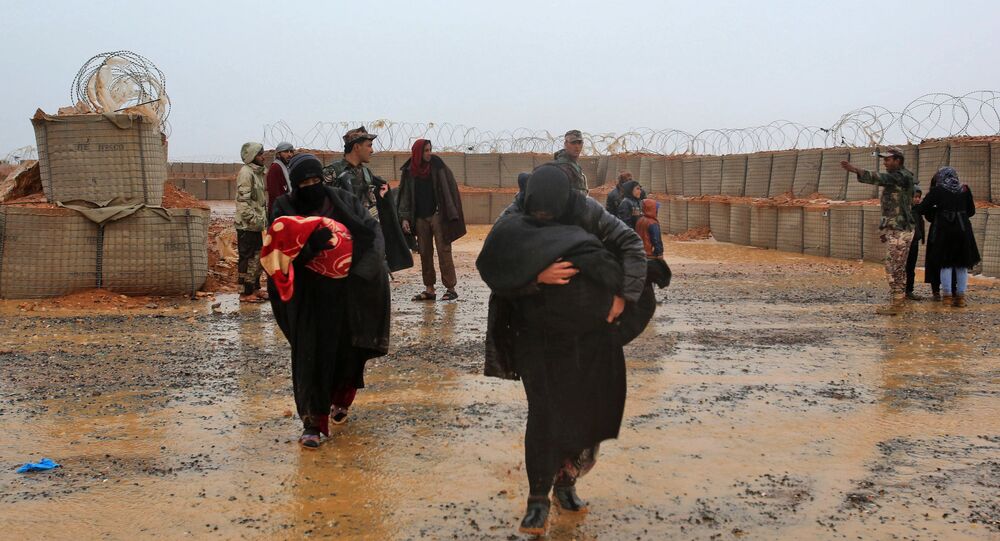 The United States is responsible for the catastrophic humanitarian situation in the Rukban refugee camp in Syria, as it has illegally occupied this territory, Yury Tarasov, the representative of the Russian Defense Ministry in taskforces on ceasefire and humanitarian issues in Geneva, said on Friday.

"The whole responsibility for the outrageous situation in Rukban rests with the United States, as it occupies the territory illegally and it uses the humanitarian problems of the refugee camp to legitimize its military presence in the south of Syria. We believe that the elimination of a 55-kilometer [34 mile] zone around At-Tanf [where a US military base is located] will result in the closure of the Rukban camp," Tarasov said at a conference of the Russian and Syrian centers for refugees return.

He specified that Russian representatives in the taskforces on ceasefire and humanitarian issues were ready to cooperate with international organizations on settling the Rukban camp humanitarian crisis and on evacuating all the refugees willing to leave it.

"As of today, one of the most urgent problems is the situation in the Rukban refugee camp, which is in an extremely difficult humanitarian situation. I want to note that the total number of temporarily displaced people in it is about 50,000 people, of which about 6,000 are militants of the Maghawir Al-Thawra group controlled by the United States," Tarasov said.

© AP Photo / Lefteris Pitarakis
Daesh Attacks Refugee Camp in Syria, Take Hundreds Hostage - Russian Military
A similar stance has been voiced by Mikhail Mizintsev, the head of the Russian National Defense Control Center, who stated that the situation in the Syrian refugee camp Rukban reminds of World War II concentration camps, but the global community keeps silent about the catastrophe.

"The situation in which the residents of the camp have found themselves in reminds me very much of World War II concentration camps that seemed to have long become history. How have this become possible in the modern world?… Why does the global community, so much concerned about human rights, stubbornly keep silent about the humanitarian catastrophe of the Rukban camp residents, while they are in fact hostages?" Mizintsev said at a meeting of Russian and Syrian joint coordination committees on repatriation of refugees.

He went on to say that UN official institutions, obliged to provide assistance to refugees, were not actively engaged in settling the humanitarian catastrophe of the Syrian refugees.

"Why are not media representatives allowed to communicate with refugees living in Rukban? There is an explanation to it. Someone has something to conceal there. Who is responsible for this barbarity? The answer is on the surface," Mizintsev added.

At the same time, Russian Health Ministry spokesman Sergey Grabchak reported that diseases and absence of medical assistance in the camp led to the deaths of more than 100 people.

According to the Health Ministry, the disastrous sanitary and epidemiological situation in the camp, an outbreak of infectious diseases was likely, while refugees almost did not receive medical assistance.

"All these circumstances lead to a high mortality rate. Over the past month alone, more than 100 people died in Rukban. I confirm the difficult, disastrous situation in Rukban," Grabchak said.

The Rukban refugee camp is located in Syria's At Tanf district (Homs province) near the Jordanian border, next to a US military base where Syrian opposition forces are being trained.