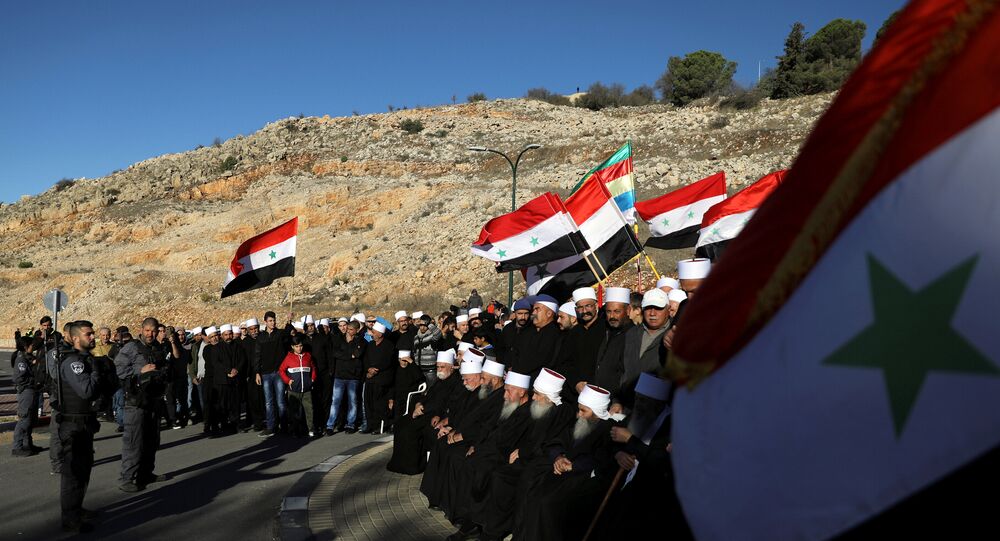 Syrian and Druze families living in the Israeli occupied Golan Heights have been protesting against Tel Aviv’s policies amid ongoing local elections. The protesters have been burning election ballots, waving Syrian flags and putting up portraits of Bashar al-Assad along the border with Syria.

The Syrian TV channel Ikhbariya has reported that one of its reporters was called in for questioning over his coverage of the protests against the Israeli elections in the Golan Heights.

"Forces of the Israeli occupants have called in Ikhbariya's reporter in Golan Heights for questioning after he highlighted the protests of our citizens living in the Golan Heights against local elections and their actions of support for our country," the channel said.

Residents of the Golan Heights, occupied by Israel, were electing local lawmakers and city mayors on October 30. This was the first time that Israeli authorities allowed Syrians and Druzes, who have been denied exchanging their Syrian citizenship for Israeli, to cast their votes. Still, the measure was met with protests in the Golan Heights, with Syrians burning election ballots and waving Syrian flags.

Druze Arabs attempted to block the entrances to polling stations in protest against the elections, but were dispersed by Israeli police using tear gas.

The Golan Heights were seized by Israel from Syria during the Six-Day War in 1967 and for a long time the territory was governed by an Israeli military administration. However, in 1981 Tel Aviv decided to extend its laws to the occupied territory and established a civil administration in it. The decision was condemned by the UN Security Council as illegal from the point of international law, despite Israel justifying it as aimed at safeguarding its borders from aggressive military acts.