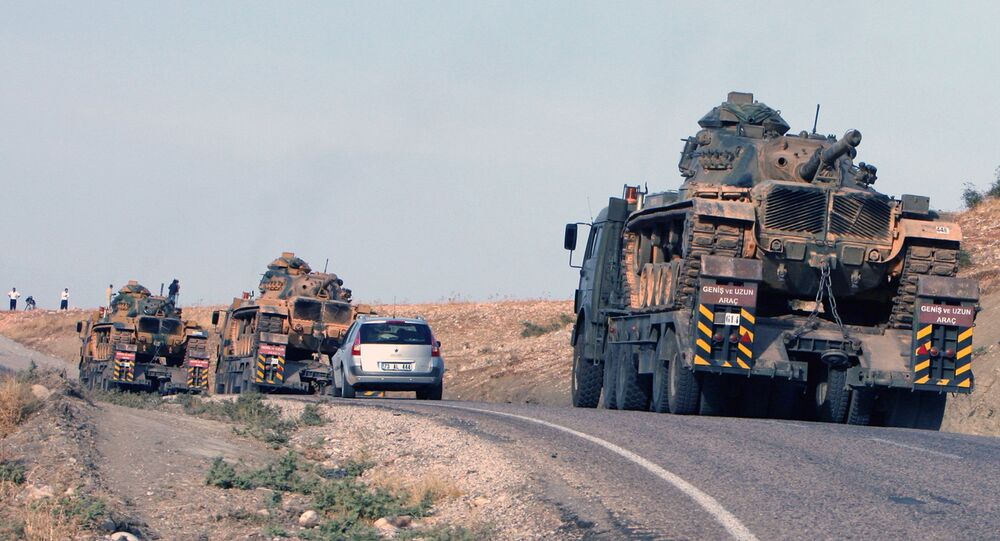 WASHINGTON (Sputnik) - The United States has been in contact with both Turkey and the Kurdish-led Syrian Democratic Forces (SDF) following Ankara’s announcement it will launch an operation against the Syrian Kurdish People's Protection Units (YPG) to the east of the Euphrates River, Pentagon spokesperson Sean Robertson told Sputnik on Tuesday.

The Kurdish-led Syrian Democratic Forces (SDF) continue to be a devoted partner of the United States in the fights against the Daesh* terrorist group, Sean Robertson said.

"We are aware of Turkish statements about a planned offensive into northeast Syria and have been in touch with Turkey and the SDF to de-escalate the situation," he said.

Robertson stressed that Turkey is a NATO ally and a key partner in the global coalition to defeat the Daesh terrorist group, and the United States remains fully committed to Turkey's border security.

"We encourage all parties to avoid escalation and focus on the most important task of defeating ISIS," he added.

© AP Photo / Mursel Coban, Depo Photos
Turkey Prepping for Large-Scale Op Against Syrian Kurdish Forces - Erdogan
Robertson said US forces "remain fully committed" to the implementation of a road map for the city of Manbij agreed by Secretary of State Mike Pompeo and his Turkish counterpart, Foreign Minister Mevlut Cavusoglu. Under the agreement US and Turkish forces are expected to start joint patrols of the Syrian city, which lies to the west of the Euphrates.

"US and Turkish soldiers have actively trained side-by-side for this critical mission, and we are confident that these patrols will be an important step forward on the Manbij Roadmap," Robertson added.

Robertson said the SDF remains committed partner of the United States in the in the anti-Daesh fight.

"The campaign against ISIS is not over, and the fight remains very difficult," he said. "We are working closely with the SDF, who are in the midst of offensive operations against ISIS in the Middle Euphrates River Valley. The SDF remains a committed partner against ISIS."

Robertson stressed, however, that US officials take Turkey's "legitimate security concerns" seriously and Washington remains committed to working with Ankara as a NATO ally and partner in the fight against Daesh.

"We are already working closely with Turkey to address the threat that the Kurdistan Workers' Party (PKK), a U.S.-designated Foreign Terrorist Organization, poses to Turkish security," he noted.

READ MORE: Turkey, US to Decide How to Govern Syria's Manbij After Kurdish Withdrawal

Since August 2016, Manbij has been controlled by Kurdish groups that liberated it from terrorist organizations, including the Daesh terrorist group, which took it over in January 2014.

In June 2018, Turkey and the United States adopted a road map envisaging the withdrawal of the US-backed Syrian Kurdish People's Protection Units (YPG) from the city. The Turkish government has long been seeking the YPG withdrawal over security concerns, as it regards the YPG as an affiliate of the Kurdistan Workers' Party, listed as a terrorist organization in the country.

Since June 18, the Turkish and the US-led coalition's forces have been carrying out independent patrols in Manbij, while planning to carry out joint patrols in the future.

Ankara has repeatedly accused Washington of failing to fulfill its promises regarding the withdrawal of the YPG.

*Daesh (aka ISIS/IS/Islamic State) is a terrorist group outlawed in Russia and many other countries.

Zero Chance of Deal With Iran, PDKI Must Continue to Defend Kurds – Official