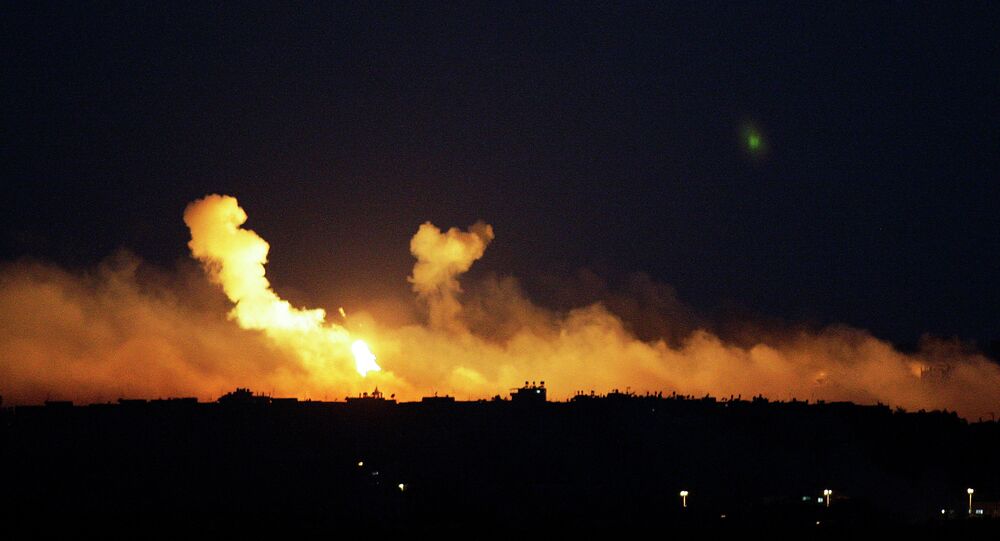 TEL AVIV (Sputnik) – The Israeli military said Saturday it had struck two arms workshops, five bases, a training camp, an entrance to an underground tunnel and an observation post among other Hamas targets in the Gaza Strip.

"In response to the actions of [the Palestinian movement] Hamas, dozens of fighter jets, attack helicopters and other aircraft of the Israel Defense Forces conducted powerful overnight strikes on around 80 Hamas targets across the Gaza Strip," the IDF said in a statement.

IDF said on Saturday they had started air raids against targets in the Gaza Strip in response to the recent shelling from the area. "In response to the rockets fired from #Gaza at #Israel over the last 2.5 hours, IDF fighter jets and attack helicopters have started striking terror targets in Gaza… More targets will be struck in Gaza," the IDF wrote on Twitter.

The IDF said late on Friday that up to 12 rockets had been fired from Gaza on its territory. Rocket alert was issued in the city of Sderot and the Sha'ar HaNegev area surrounding it, which are located near the Palestinian enclave's border.

The Israeli military subsequently wrote on Twitter that "8/14 rockets fired from Gaza were successfully intercepted by the soldiers operating the Iron Dome" air defense system.

Earlier on Saturday, the IDF said it had registered 30 rocket launches from Gaza in the course of the night.

The military said that its Chief of General Staff Gadi Eizenkot had held a meeting with military and security senior officials on response measures to the recent shelling from Gaza.

The attack from the Palestinian enclave and the response air strikes by Israel represent one of the multiple cases of escalation between the two sides that happened this year. The previous exchange of strikes took place on Thursday when the IDF said it registered the launch of a projectile from Gaza and intercepted it with the Iron Dome system.

In response to 30 rockets fired from #Gaza at #Israel, this is what we targeted in Gaza:
📍2 weapon manufacturing facilities.
📍5 military compounds.
📍1 training compound.
📍1 terror tunnel.
📍Anti-aircraft observation post. pic.twitter.com/AW7d4CST5Q

© AFP 2021 / MOHAMMED ABED
IDF: Israeli Jets, Helicopters Pound Gaza Targets in Response to Rocket Strike
Tensions between the Israeli and Palestinians in Gaza flared up amid the Great March of Return rally, which began on March 30. The Israeli side has been using lethal arms to suppress the rallies citing security concerns and putting the blame for the escalation on the Hamas movement, governing the area.