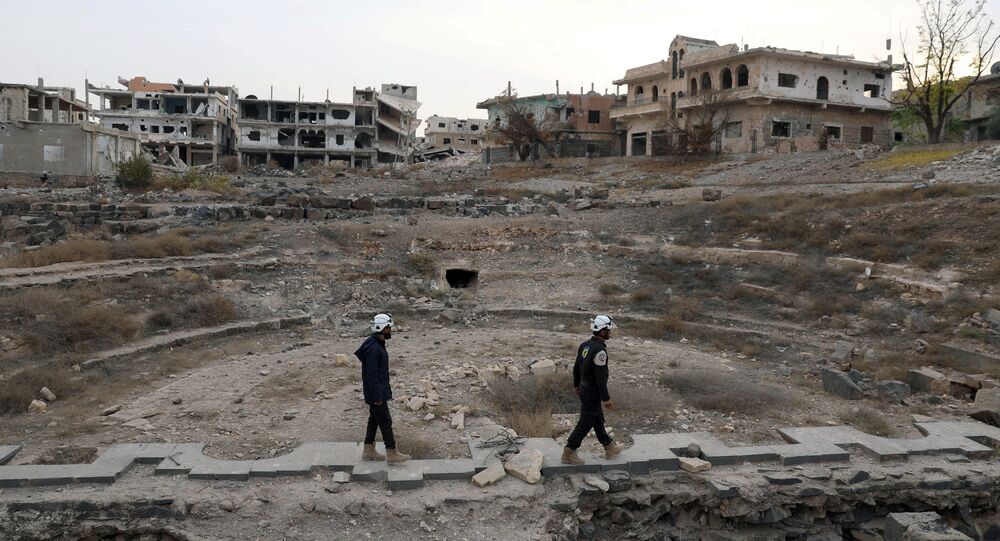 The controversial White Helmets rescue group has been praised in the Western media as heroes, and derided by the Syrian government as 'al-Qaeda's civil defense' network. But is there a middle ground between such polarizing views? A Sputnik correspondent got an unprecedented inside look into the group's operations in southern Syria.

A few months ago, visiting the Al-Omari mosque in Daraa Al Balad in the old section of the city of Daraa would have been impossible. It was here, in 2011, that the first large-scale protests against the Syrian government began, eventually sparking the gruesome, foreign-backed civil conflict which has lasted over seven long years and claimed hundreds of thousands of lives.

Next to the mosque, in a former police building, Syria's national flag flies again. Before the ceasefire, the building served as the headquarters of the White Helmets. This summer, after the Syrian military's offensive to liberate southern Syria wrapped up and Russian military diplomacy helped secure peace, the White Helmets disbanded and handed the building back to the government.

© Sputnik / Morad Saeed
Canada Working to Resettle Group of White Helmets
Paying a visit to Daraa Al Balad, Sputnik correspondent Mikhail Alaeddin was able to meet with Hassan Farouk Mohammed, the former chief of the White Helmets in the area, as well as members of his staff, and got an exclusive first-hand look into the group's operations, and who they got their orders from.

At the entrance to the old city is a Syrian Army checkpoint. Beyond it, former members of the Free Syrian Army, a non-jihadist faction in the Syrian war, are tasked with ensuring security. A former FSA fighter accompanied Alaeddin into the city. During the drive to the former White Helmets headquarters, restoration work could be seen in residential blocks damaged during the war.

In the city center Alaeddin met Abu Sharif, a former militant leader, who invited him into the courtyard of his home. "How can I help you and what is it that you want?" he asked. After being told that Sputnik would like to get better acquainted with the White Helmets, he calmly got up and asked Alaeddin to follow him.

"We are revolutionaries here, and agreed to peace-making with the government for the sake of peace. We are not Nusra Front* or Daesh (ISIS).* They are terrorists. So relax, let's go to the police chief's place and they will tell you and show you everything," Sharif said.

At the police station, Alaeddin and his crew were met by the police chief, who ordered a subordinate to call Hassan Farouk Mohammed, the civil defense head, whose home is conveniently located just a few steps from the station. Hassan and other former White Helmets assemble, and a conversation starts.

"I would like you to convey a message, let everyone hear it. The White Helmets are a politicized organization that has nothing to do with neutrality," Hassan said, standing in front of a fire truck in the police station courtyard. "They carried out the tasks which were set for them, and then discarded us," he added.

"This wasn't humanitarian aid or anything like that," Hassan emphasized. "Smugglers in Jordan bought the equipment and sold it to us at a premium – it was just business. The leadership of the White Helmets carried out their political agenda and abandoned us," he repeated, while pointing to oxygen cylinders, gas masks, helmets and German-made workwear. Most of the equipment looked new and still in its packaging, apparently having been bought relatively recently.

© Sputnik / Mikhail Alayeddin
Hassan showing some of the equipment brought from Jordan used by the local White Helmets.

According to Hassan, he and his men formed a volunteer civil defense unit in militant-controlled Daraa long before the White Helmets appeared. After the White Helmets were established, his unit did not receive instructions to create provocations like those in Eastern Ghouta and elsewhere, the rescue chief insisted.

"We don't know what happened in the Damascus suburbs, Aleppo and Idlib. It's possible that these were political put-up jobs ordered by the White Helmets' leaders in the north, and carried out for money, of course," one of Hassan's rescuers said, jumping into the conversation.

Hassan invited Alaeddin into his backyard for refreshments, where they were soon joined by two more former White Helmets.

"The fact that we did not disband after reconciliation and are talking to you now is proof that we honestly carried out our direct duties and have no reason to fear imprisonment or persecution. We are all locals, and when the authorities came back, we handed our ambulance over to them; our guys are now working on the other side of the city, unblocking roads and helping to clear the rubble," one of the men said.

© Sputnik / Mikhail Alayeddin
Hassan showing some of the rescue equipment in the local fire engine's compartments.

Commenting on the evacuation of 300 White Helmets and 500 members of their families from southern Syria through Israel and Jordan at the request of the US, Canada and several Western European countries, Hassan admitted that four of his people left, presumably in search of a better life abroad. The rest of those of who left went home to neighboring Quneitra province, he said.

© AFP 2021 / AMER ALMOHIBANY
Russia Wants White Helmets Removed From Syria 'as Soon as Possible' - Envoy to UN
In July, Damascus accused Tel Aviv of evacuating members of the White Helmets and their families, with local media reporting that about 800 people in total were transported to Jordan via Israel. Jordanian officials have since confirmed that several hundred White Helmets members had been accepted in the country for a three month period, with 279 of them having left Jordan for resettlement in the West as of this week.

Efforts to learn more about the White Helmets' operations in Aleppo and Eastern Ghouta have been more difficult than in Daraa, with most of the members of the 'rescue groups' mysteriously dissolving after the Syrian government won back control of these cities, leaving behind only their branded helmets and emblems painted on the walls of residential buildings.

"We were meant to become the basis for the restoration of the new Syria. We helped and were willing to help all Syrians, no matter where they were. But the White Helmets ruined the reputation of civil defense workers, and carried out their deeds under the guise of being volunteers," Hassan concluded.