The Saudi prosecutor general announced on state television Friday that their preliminary conclusion about the fate of journalist Jamal Khashoggi is that a fight broke out between him and people who met him in the Saudi Consulate in Istanbul on October 2, an altercation which led to his death.

The Saudi top prosecutor also said that while the investigation is still underway, 18 Saudi nationals have been arrested so far.

Saudi state media also announced that Gen. Ahmed Al-Assiri, a senior adviser to Crown Prince Mohammad bin Salman and a high-ranking official in the monarchy's general intelligence directorate, was fired from his post Friday amid reports that he would be the "fall guy" for Khashoggi's death, the New York Times reported. It was also reported that Saud al-Qahtani, a royal court adviser, was removed.

The White House has responded to the announcement by saying that it acknowledges the Saudi statement on the journalist's fate, adding that it is "saddened" to hear that Khashoggi is dead.

“The United States acknowledges the announcement from the Kingdom of Saudi Arabia that its investigation into the fate of Jamal Khashoggi is progressing and that it has taken action against the suspects it has identified thus far,” White House Press Secretary Sarah Sanders said.

She also said that Washington will continue to "closely follow the international investigations into this tragic incident and advocate for justice that is timely, transparent, and in accordance with all due process."

US President Donald Trump said that he will speak to the Saudi Crown Prince about the Khashoggi case, noting that he doesn't think that the Saudi leadership lied to him. He also said that he preferred that the American response not include canceling weapons sales to Saudi Arabia, adding that he will be working with Congress on this case and saying that Washington needs the Saudis as a counterbalance to Iran.

The Washington Post, a publication to which Khashoggi regularly contributed, reported on Tuesday that Qahtani is Mohammad bin Salman's "media adviser but also increasingly his consigliere," helping to boost his media image but also using the latest methods to help crack down on dissent online.

The claims come amid news that Salman and Turkish President Recep Tayyip Erdogan spoke over the phone Friday about the progress of both of their investigations. 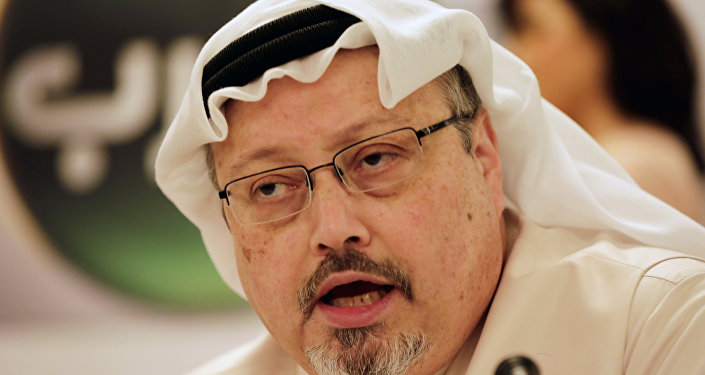 © AP Photo / Hasan Jamali
Trump: We'll Have Answers Soon on Khashoggi, Might Consider Sanctions on Saudi Arabia
Khashoggi reportedly never left the consulate after entering it on October 2 to obtain papers necessary for his upcoming marriage. After weeks of speculation and widespread reports that he had been killed or abducted, this is the first confirmation of the journalist's death.

The United Nations Secretary-General Antonio Guterres commented on the Saudi announcement, saying that he was "deeply troubled" by the confirmation of Khashoggi's death and stressed the need for a "prompt, thorough, transparent investigation."