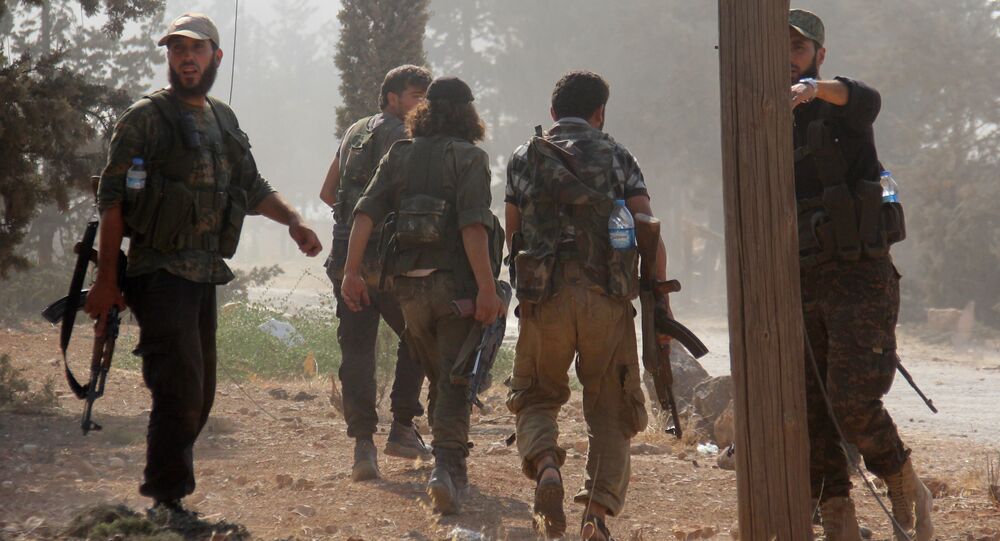 DAMASCUS (Sputnik) - Militants from the terrorist organizations Hayat Tahrir al-Sham and Jabhat al-Nusra* and are not willing to withdraw their forces from the demilitarized zone in the northwestern Syrian province of Idlib, as Turkey has not provided the guarantee of their security, the Al Watan newspaper reported on Thursday, citing sources.

The sources close to the armed groups operating in the provinces of Aleppo and Idlib told the Al Watan newspaper that Jabhat al-Nusra and other terrorist organizations, including the Turkistan Islamic Party* and Haras al-Din, would not leave the demilitarized zone as they had not received sufficient guarantees of security for their foreign members from Turkey. They specified that some of the foreign contract fighters were denied access to their home countries.

© REUTERS / Zohra Bensemra/File Photo
Daesh Seizes Chlorine Barrels After Fight With Nusra Front Militants In Syria - Russian MoD
According to the sources, Ankara failed to provide these guarantees as it is concerned over the foreign contract fighters' possible fleeing to Turkey and the consequent deterioration of the security situation there.

The sources went on to say that Turkey was concerned over possible direct confrontation with the radical organizations, and it was willing to extend the terms of armed groups' withdrawal from Idlib and pursue talks with their leaders.

© AFP 2020 / Greg Baker
Nusra Front May Produce Weaponized Chlorine in Syria - UN Envoy
On October 10, the Turkish Defense Ministry said in a statement that all the heavy weapons, including tanks and artillery, had been withdrawn from Idlib.

Earlier in October, media reports suggested that the militants had pledged to withdraw under pressure from the Turkish intelligence, but only if Turkey guaranteed their security.

While the Syrian government has regained control over most of the country's territories, Idlib remains the only province where extremist and rebel forces are still active.

In mid-September, Russian President Vladimir Putin and his Turkish counterpart Recep Tayyip Erdogan agreed to set up a demilitarized zone in Idlib by October 15, while Russian Foreign Minister Sergei Lavrov said on Wednesday that it could become fully operational a day or two later than scheduled.

The Russian and the Turkish military are engaged in a constant dialogue with the armed opposition on reconciliation in Idlib.