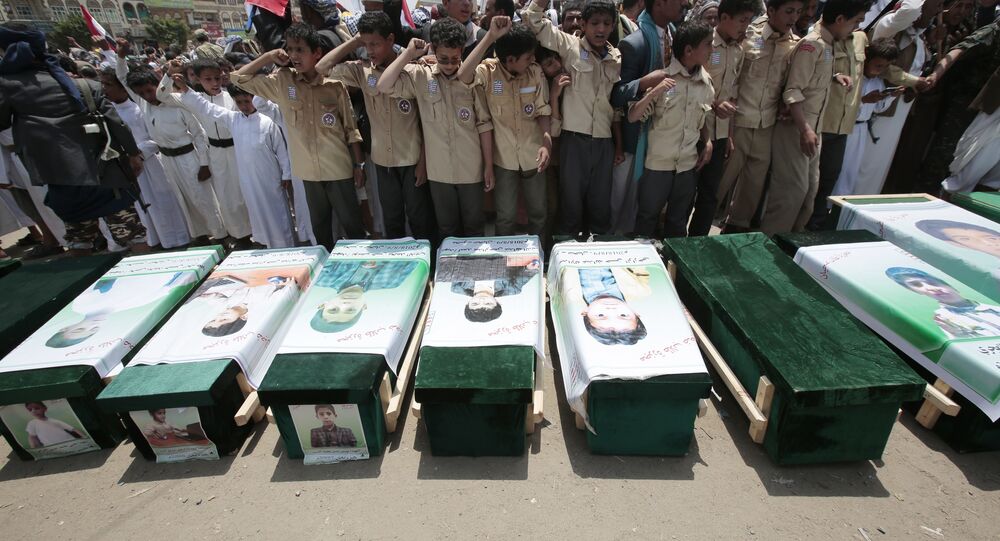 WASHINGTON (Sputnik) - The advocacy group Human Rights Watch (HRW) is hopeful the US Congress will eventually ban arms sales to Saudi Arabia and the United Arab Emirates, as unlawful attacks against civilians in Yemen have persisted since they last considered such a measure, Human Rights Watch Deputy Director told Sputnik.

“The last time that the Senate voted on stopping arms sales, it came very close to passing," HRW Deputy Washington Director Andrea Prasow said.“The significant number of unlawful attacks that have occurred since, I think, suggests that if the Senate faces that kind of vote again, it might pass, and the Senate might actually try to ban arms sales to Saudi Arabia and possibly the UAE. It shouldn’t come to that though. The US government should decide on its own that it shouldn’t send this signal to the Saudis that they can continue with unlimited US support.”

© REUTERS / Hani Mohammed
Yemen Hopes for New Talks With Houthis After Failed Negotiations – Ambassador
Prasow noted that HRW and other rights groups consistently urge the Congress to stop selling weapons to Saudi Arabia so long as such armed attacks on civilians continue, though such efforts have not yet yielded results.

The HRW deputy chief also emphasized that most of the unlawful attacks are carried out by the Saud-led coalition, and Human Rights Watch has documented "87 unlawful attacks some of which are war crimes."

She further stated that there "has been virtually no investigation and no accountability for those attacks.”

The rights activist noted that HRW and other rights groups have been able to document the use of specific US weapons in many of these attacks.

“We can document which companies have manufactured them and when they were sold,” Prasow explained. “I think these companies have to be asking themselves as well whether they are living up to their own independent obligations. Knowing that these weapons are being used unlawfully, can they really continue to sell them?”

Prasow also noted that representatives of human rights groups and the media needed to have access to Yemen given that the Saudi-led military coalition has largely restricted it.

"Access that journalists and human rights investigators have to Yemen is relatively circumscribed. So, it's hard for us to document that [violations]," Prasow said."[Access is limited] largely by the Saudi-led coalition, which has restricted, for example, flights going to Sanaa."

In addition, Parsow said that the Saudi-led coalition only allows access to "humanitarian actors, not human rights actors or journalists." She explained further that people have to go either by boat or through the south and travel by land which can be a very fraught attempt.

"Of course, there is a conflict going on but Human Rights Watch goes to conflicts all over the world, we can handle that. But we do need increased access," the human rights activist said.

The HRW director also revealed that Human Rights Watch was concerned about unlawful detention and torture in detention by really all parties to the Yemeni conflict. So far, the organization has documented torture in United Arab Emirates (UAE)-run prisons either by the UAE or by Yemeni forces trained and backed by UAE as well as by Yemen's Houthi rebels, she said.

"So, this is a huge problem," Parsow said. "People are being detained by multiple parties for political reasons, because of tribal disputes, unlawfully, not charged with crimes, tortured in detention, disappeared. So that's another huge problem and there isn't a lot of visibility into that. People are often held in sort of unofficial detention centers, so it's hard to track that," Parsow said.

Prasow also expressed concerns about implications with respect to human rights over the humanitarian crisis in Yemen’s port city of Al Hudaydah.

Earlier this year, the US Congress passed a measure requiring the secretary of state to notify Congress whether the Saudi-led coalition was taking steps to prevent the loss of civilian lives in Yemen.

Failure to certify such steps could have forced the Trump administration to halt US refueling of Saud-led coalition aircraft or possibly even US arms supplies to the kingdom.

However, in September, Secretary of State Mike Pompeo certified to Congress that Saudi Arabia and the UAE were trying to limit civilian casualties in the conflict, paving the way for continued US military support to the Arab alliance.

© AFP 2021 / SALEH AL-OBEIDI
Saudi-Led Coalition Announces Large-Scale Offensive on Hodeidah Port in Yemen
A recent UN report said Saudi-led coalition airstrikes were responsible for most of more than 16,000 civilians killed or injured in the Yemen conflict over the past three years.

Saudi airstrikes have hit open-air markets, health clinics, schools, funerals and weddings, killing scores of civilians. An August attack on a school bus killed more than 40 Yemeni students who were on a field trip.

The situation in the war-torn country has deteriorated sharply since June, when the Saudi-led coalition launched an offensive to seize Al Hudaydah, a key port city for humanitarian aid, from the Houthis.