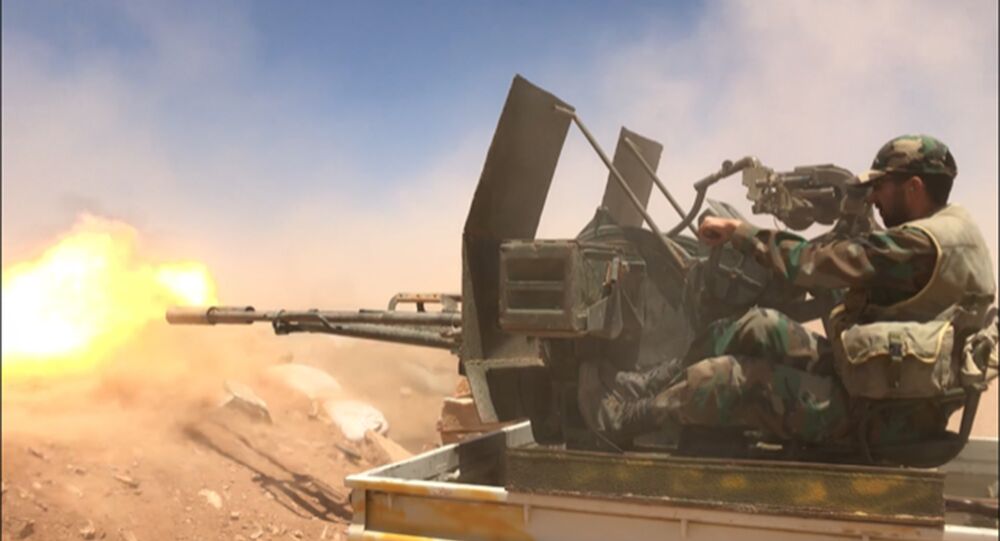 The Syrian Army went ahead with its military operation against terrorists in the southern region of the country after a short tactical pause. A Sputnik correspondent in the As-Suwayda desert reported that the troops had made territorial gains and destroyed tens of militants.

On Friday, Syrian government forces resumed their offensive against terrorist groups occupying the strategic heights in Tulul al-Safa, a southern region in the desert of As-Suwayda.

This came after a short pause made to work out new military tactics, give some rest to the troops, and supply reinforcement and ammunition.

The Syrian Army advanced hundreds of meters on Friday, wiping out tens of Daesh* terrorists — mainly those shooting from caves and crevices in the mountainous area.

Syrian airstrikes have destroyed many fortifications, according to a Sputnik correspondent in the As-Suwayda desert.

The army's goal now is to root out illegal armed groups in the area before winter, which is expected to bring rainfalls that will save the besieged militants from dehydration. The Syrian military has already cut off supplies of fresh water to militants.

In August, the Russian General Staff confirmed that the Syrian government had successfully restored control over the provinces of As-Suwayda, Daraa and Quneitra in southern Syria. Control was established in part thanks to the Russian Reconciliation Center having convinced some of the militants to lay down their weapons and either move to the province of Idlib, to reunite with their families, or to join the fight against Daesh* and other terrorist groups.

*Daesh (aka IS/ISIS/Islamic State) is a terrorist group outlawed in Russia and many other countries.