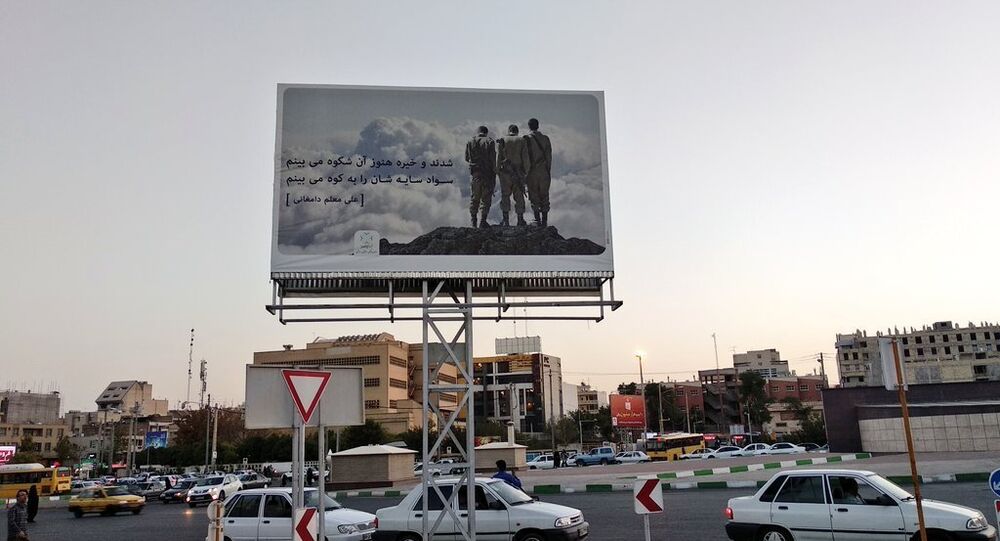 In an embarrassing error, a billboard in the Iranian city of Shiraz meant to commemorate the country’s eight-year-long war with Iraq accidentally featured images of soldiers from the Islamic Republic’s more perennial rival: the Israel Defense Forces.

Iran is in the middle of its Sacred Defense Week, a week-long holiday meant to commemorate the Iran-Iraq War, fought between the two countries from 1980 until 1988. Unfortunately, one ad in Shiraz, a city in Fars that is Iran's fifth-largest, purported to show Iranian soldiers gazing out from a mountaintop at the horizon, but instead showed soldiers from Israel, a country revolutionary leader and Shiite cleric Ayatollah Ruhollah Khomeini called "the little satan" (compared to the United States' "big satan").

​What's more, the original photo featured a female soldier, who was edited out for the Shiraz billboard, and clouds were put in to replace the original backdrop of a suburban locale. The soldiers' uniforms in the ad don't look like Iranian army uniforms, either.

​Once the ad's true nature became known, it was quickly taken down.

​The brutal war began when Iraqi President Saddam Hussein invaded the largely-Arab province of Khuzestan in southwestern Iran, expecting the population to rise against the new Shiite government in Tehran. Instead, the population resisted the Iraqi onslaught, which turned into a scorched-earth massacre by the Iraqis as Iranian forces pushed them out of Iran in 1982.

The slip-up is poignant for a number of reasons. This past weekend, armed assailants from a Khuzestani terrorist group, al-Ahvaziya, that has connections to Saudi Arabia, attacked a parade of the Iranian Revolutionary Guard Corps (IRGC) in the regional capital of Ahwaz during a commemoration of the start of the catastrophic war. The gunmen killed 25 and wounded 53 people. Close to 80,000 IRGC members died in the war.

Secondly, the city of Shiraz was itself a victim of one of the more nefarious episodes of the war, the so-called "War of the Cities," during which both sides took to inflicting massive civilian casualties by attacking the other side's urban areas. One attack in Shiraz in October 1986 blew up a Boeing 737 airliner disembarking passengers at the international airport.

In addition, US leaders have been giving increasingly prominent attention to the People's Mujahedin of Iran (MEK), a terrorist organization that fought for Iraq during the war and carried out numerous terrorist attacks in Iran, and which today has links with the Israeli government, who used the group to supply fake evidence about Iran's nuclear program in the early 2000s, Sputnik reported.

By war's end, nearly 300,000 Iranians and 375,000 Iraqis had died, according to Global Security, with no appreciable gains for either side.

Analysts: EU Vehicle for Iran Trade Viable Only for Small Firms Unrelated to US

Iran President: 'We Do Not Wish to Go to War With US Forces Anywhere in Region'