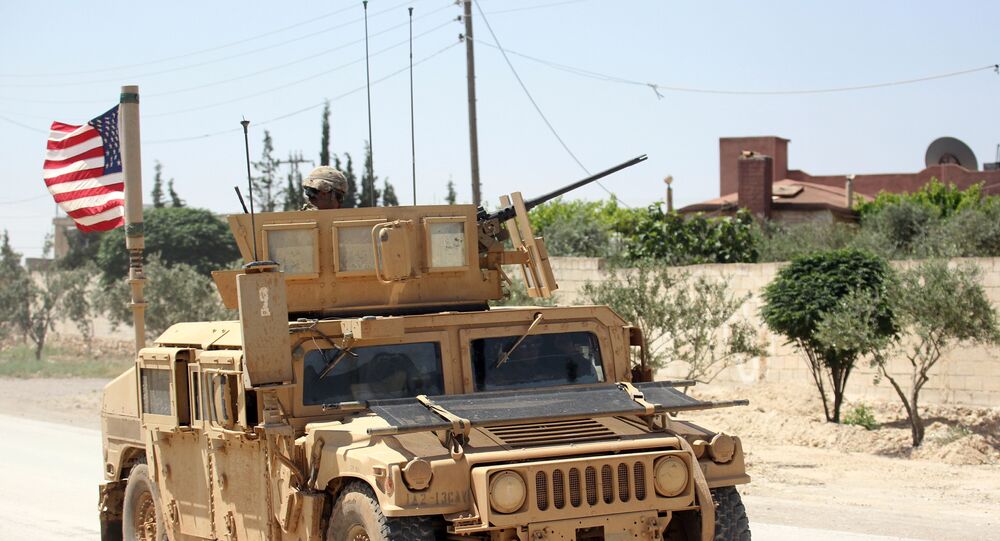 Earlier, the US-led coalition rejected allegations that a Syrian militant group has set up training camps near the Pentagon's military base in the town of al-Tanf in southeastern Syria.

Reuters has cited a commander of the Pentagon-backed Maghawir al-Thawra militant group as saying that the drills, which wrapped up near the US military base in the Syrian town of al-Tanf, were the first such exercises and involved hundreds of rebels and US marines.

"These exercises have great importance and have enhanced the defenses of the area and improved the combat capabilities and morale and that of civilians in the area," Colonel Muhanad al- Talaa said.

US military spokesman Sean Ryan, for his part, described the war games as a show of force, which he said were conducted "to reinforce our capabilities and ensure we are ready to respond to any threat to our forces within our area of operations."

He added that the Pentagon used the so-called "de-confliction" channels to notify Russia of the drills in order to prevent "miscommunication or escalate tension."

The remarks came after a spokesperson for the US-led coalition's Operation Inherent Resolve against Daesh* told Sputnik that "there is no terrorist camp within the al-Tanf de-confliction zone, which runs in a 55k diameter around the coalition's al-Tanf Garrison."

In August, the Russian Defense Ministry blamed the US military for harboring Daesh militants within the al-Tanf area, where a 55 km (35 mile)-radius "deconfliction zone" was established earlier.

Syrian Foreign Minister Walid al-Muallem has described the US military presence in the country as illegal, insisting that the American forces should withdraw from its base in al-Tanf.

In May, Bashar Jaafari, head of the Syrian government delegation to the Astana peace talks, called the US military presence in al-Tanf and nearby Rukban refugee camp in the south of the country a"pure aggression and occupation."

© Sputnik / Iliya Pitalev
US Won't Leave Syria as Long as Assad Stays in Power – American Journo
The base, however, has become the subject of criticism as Damascus and Moscow have expressed concerns that Washington was "spewing Daesh mobile groups who make inroads to launch subversive terrorist operations against Syrian troops and civilians."

The US-led coalition has been carrying out airstrikes against Daesh targets in Syria since 2014, in a mission that that was never approved by Damascus or the UN. Currently, about 2,000 US troops are deployed in this Arab country.

Is the US Preparing a Massive Military Attack Against Syria?