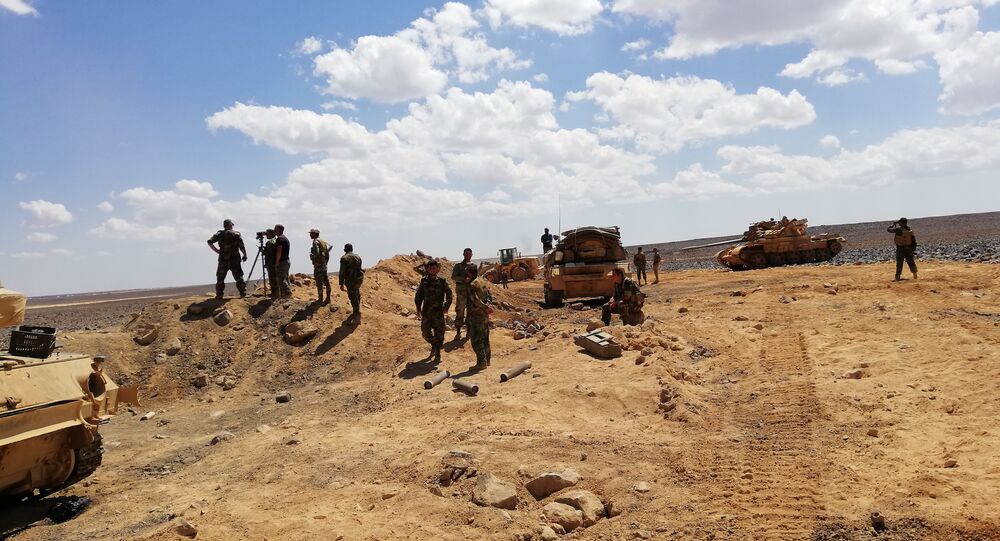 The remnants of the terrorist group were earlier reported to have been cut off from their supply routes in the As-Suwayda desert, with Syrian government troops on course to mopping up the last of the entrenched militants from the area.

The Syrian Army is storming extinct volcanos in the Tulul al-Safa area in the wilderness of As-Suwayda governorate. The offensive, conducted across multiple directions simultaneously, is being covered by a Sputnik correspondent embedded with Syrian forces.

Nearly a dozen Daesh* militants, mostly snipers hidden away in the gorges on the approaches to the area's strategic heights, were eliminated on Wednesday, according to the military.

An officer involved in the operation offered Sputnik details about the course of the offensive.

© AFP 2021 / Anas AL-DYAB
'Civil War in Syria Will Not End in Idlib' – Israeli Publicist
"The forces of the Syrian Army continue to advance to the heights of Tulul al-Safa," he said. "The terrorists have begun to suffer from hunger and thirst after the siege was imposed. When their supplies ran out, militants tried several times to break through the encirclement, but to no avail."

The military cut Daesh off from its supply lines last week after several weeks of intense fighting.

According to the officer, Syrian artillery continues to pound the militants' positions, and is fully equipped to continue its operations. "As a result of yesterday's attack, the army advanced 3.5 km. Fighting continues. The operation will continue until the area is completely freed of the terrorists," he said.

Last month, the Russian General Staff reported that the Syrian government had successfully restored its control over the southern provinces of Al-Suwayda, Daara and Quneitra. International focus has since shifted from south Syria to Idlib province in the country's north. Idlib is now the last major stronghold for anti-government forces, which is dominated by a motley collection of jihadist militants, including the Nusra Front.

© AFP 2021 / Anas AL-DYAB
Terrorists Preparing to Use Real Chemical Weapons Against Children in Idlib – Russian MoD
Western powers have threatened to attack Syria if Damascus launches an operation to liberate Idlib. On Wednesday, French Foreign Minister Jean-Yves Le Drian warned that Paris was prepared to "react firmly together with its allies" if the Syrian army used chemical weapons. Earlier, the Russian military reported that it had evidence that an al-Qaeda-affiliated terrorist group and the White Helmets were planning to stage a false flag attack and blame it on the Syrian government to prompt a military intervention by Western powers.

*AKA ISIS/ISIL, a terrorist group outlawed in Russia and many other countries.

**AKA Al-Qaeda in Syria. Also outlawed in Russia and many other countries.