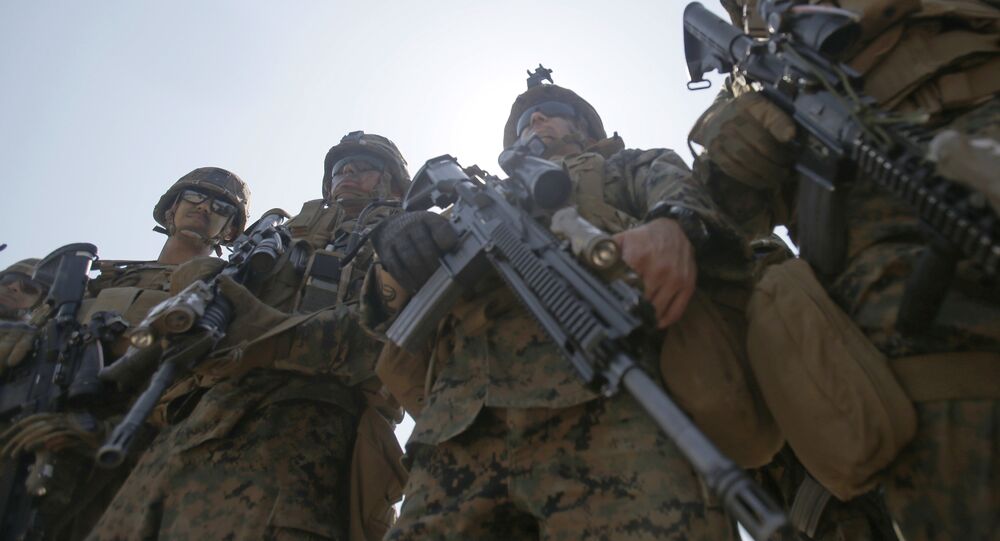 The development comes amid US media reports claiming that the Russian military had allegedly warned Washington of its plans to attack militants near America’s al-Tanf military base in Syria.

Over 100 US Marines were sent as reinforcements to the military base in al-Tanf, Syria after Russia allegedly revealed intentions of launching precision strikes on an area under the US-led coalition’s control, Task & Purpose reported.

While the official statement by the Pentagon did not mention that the reinforcements had been sent as a precautionary measure to the alleged threats, chief Central Command spokesman, Captain William Urban, said that the troops flown to the area would conduct multiday drills using live ammunition.

“Our forces will demonstrate the capability to deploy rapidly, assault a target with integrated air and ground forces and conduct rapid exfiltration,” Task & Purpose cited him as saying.

© AP Photo / Hammurabi's Justice News
Pentagon Source Reveals US Drills in Homs, Syria is Message to Russia – Reports
According to the report, US officials tackling the Syria issue have recently claimed that “the administration is now resolved to stay in Syria longer than President Trump previously indicated,” purportedly referring to POTUS’s March speech, when he suggested that the United States would leave the war-torn country “very soon.”

The news came on the heels of a CNN report about Moscow’ s alleged warnings of an impending attack on militants in the area protected by US troops.

The media outlet’s report also claimed that US Defense Secretary James Mattis and Chairman of the Joint Chiefs of Staff General Joseph Dunford were aware of the latest intelligence, adding that US troops in Syria “have the right of self-defense if they are attacked and would not need to ask permission from higher levels of the government before acting.”

“The United States does not seek to fight the Russians, the government of Syria or any groups that may be providing support to Syria in the Syrian civil war. However, the United States will not hesitate to use necessary and proportionate force to defend US, coalition or partner forces,” CNN quoted an anonymous insider.

© AFP 2021 / Anas AL-DYAB
Chemical Weapons Provocation in Idlib to Occur After Signal of 'Foreign Friends of Syrian Revolution' - Russian MoD
The Russian Ministry of Defense hasn’t commented on the claims so far.

Slightly over a week ago, Syrian government forces captured two militants near Palmyra, claiming that they were members of the Lions of the East group, the Russian Defense Ministry announced. They also confessed that they had been trained and armed by American instructors in a camp near the al-Tanf military base.

Following the statement, Sputnik reached out to a spokesperson for Operation Inherent Resolve who dismissed the aforementioned allegations as “malign propaganda.”

The US-led coalition has been carrying out airstrikes against what it referred to as Daesh* targets in Syria without either a UN mandate or Damascus’ authorization. Currently, some 2,000 US troops are said to be deployed in the war-ravaged country. The Syrian government considers their presence illegal.

READ MORE: Erdogan: It Is Necessary to ‘Resist Separatist Efforts’ in Syria

Syrian authorities, meanwhile, officially asked Russia to assist the country’s forces in fighting terrorist groups operating on the territory of the Mideast country.