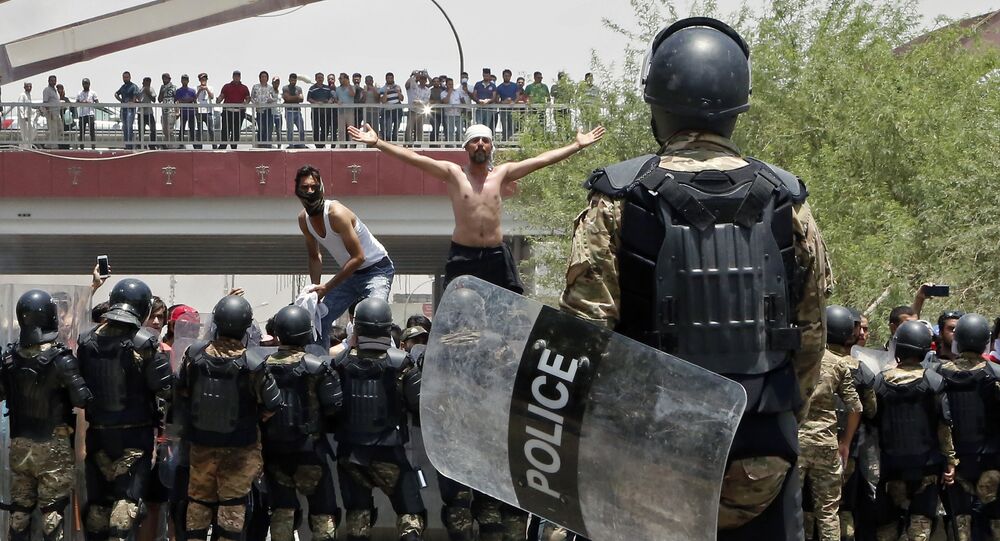 At least 10 protesters have been shot dead since Monday, September 3, in Iraq's Southern city of Basra, causing riots to break out in other parts of Iraq against the central government in Baghdad.

In an unprecedented attack, three mortar rounds reportedly landed in Baghdad's heavily fortified 'Green Zone' on Friday, September 7, following a day of snowballing protests in the country's restless south in what some are reportedly now calling a "revolution."

While there have been no immediate claims for the rocket attack, Iraqi security forces suspect that protesters were responsible, according to reports.

Sirens are heard inside the Green Zone, the seat of #Iraq government and foreign embassies, as multiple explosions rock the area.

This picture is minutes ago: pic.twitter.com/dGgBUWNKaE

​Reports of riots and confrontations between protesters and Iraqi security forces poured out of the southern city of Basra on Thursday, September 6, detailing scenes reminiscent of the lawlessness that animated Iraqi society following the Anglo-American invasion of 2003.

​The protesters — overwhelmingly made up of young people — set fire to a number of government buildings as well as the offices of a prominent Shiite militia that was involved with the liberation of the Northern city of Mosul from Daesh.

​Protesters then further escalated their confrontation with the central government by closing down the Umm Qasr seaport just 60 kilometres south of Basra. The port functions as the lifeline for Iraq, through which the majority of the country's imports pass, including the bulk of its food. The port remained shut on Friday, September 7, according to reports in Arabic media.

Signs that the situation in Iraq is increasingly precarious continue to mount, with the country's most revered Shiite cleric, Ayatollah Ali Sistani, calling for a political shakeup in Baghdad in an effort to appease the protesters.

Blaming Haider al-Abadi's government for the chaos, Sistani, the highest religious authority for Shiite Iraqis, bemoaned Baghdad's obtuseness to the protesters' demands and asserted that a new government must be formed, "different from its predecessors."

"The failings of Iraqi political leaders in recent years have caused the anger of people in Basra," read an official statement by the Ayatollah.

The developments come amidst an increasingly volatile political situation engulfing the country, which started in early July with angry protesters across the oil-rich Shiite south demanding an improvement in public services.

Residents of Basra in particular have been arguing that not only has the government of Prime Minister Haider al-Abadi failed to generate sufficient standards of living and jobs, but that it has actively sold work off to foreign contractors.

In fact, Basra is home to about 70% of Iraqi's oil production, yet nearly all jobs in the sector are taken by workers from largely Western oil firms.

The oil sector accounts for 89% of Iraq's state budget and 99% of its export revenues, yet only one percent of jobs, as the majority of posts are filled by foreign workers, something locals argue is deeply unfair.

Baghdad's parliament has canceled ordinary proceedings at least twice over the past week to hold emergency sessions on what provisions could be made to the south to halt the spiralling violence.

Yet, reaching a solution is a task that has reportedly been hobbled by ongoing political infighting between the various blocs that make up Iraq's parliament — another source of frustration pointed to by protesters.

Moqtada al-Sadr, a populist Shiite cleric whose Sairoon party came first in Iraq's may elections, agreed in August to form a coalition government with incumbent prime minister Abadi but recently came out in condemnation of his handling of the Basra protests. Mr Sadr emphasised that Abadi must quickly release more state funds to improve public services across the south.

The Sadr-Abadi coalition — backed by the US and Saudi Arabia — also has to face up to the mammoth tasks of rebuilding Mosul in the north after it was largely laid waste in the fight against Daesh, while trying to improve the situation for residents through the Shiite southern heartlands.

At the same time, the geopolitics of great power rivalries are also likely to be a consideration on the minds of both Sadr and Abadi.  As they attempt to placate an increasingly hostile uprising in the south, a rival alliance led by former Prime Minister Nouri al-Maliki and militia leader Hadi al-Amiri, supported by Iran, are already positioning themselves as an alternative government, able to save the South by offering generous financial support and promises of infrastructural development.