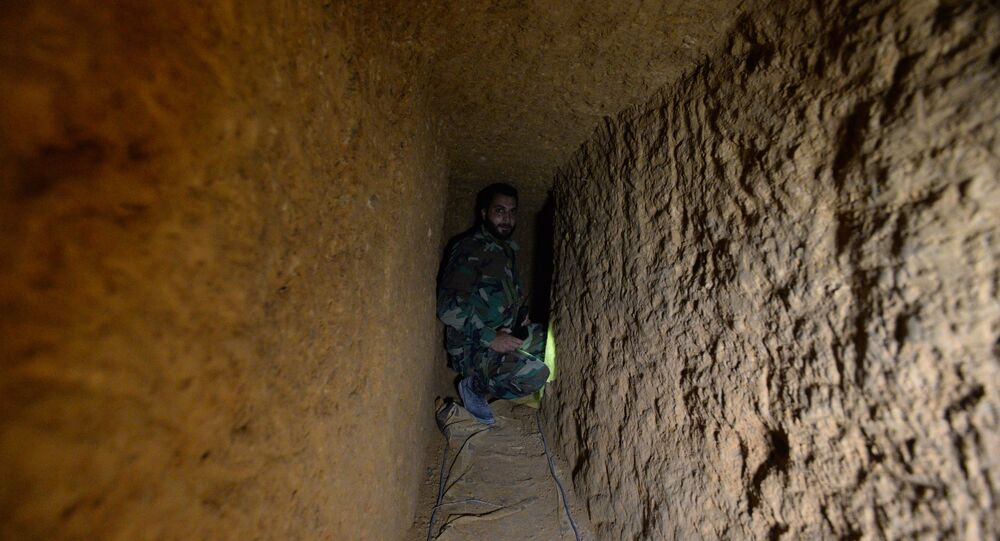 Moscow previously informed the UN and submitted evidence about planned provocations in the province of Idlib using chemical weapons. According to the Russian foreign minister, militants are hoping to use such provocations to convince Western countries to launch a new round of airstrikes on Damascus’ positions.

Sputnik Arabia's sources have reported that militants from the group Hayat Tahrir al-Sham are digging a tunnel network throughout the province as a part of their preparations for battle against the Syrian army. Locals told Sputnik that the group had forced thousands of captives to dig the tunnels both with and without special equipment. The sources also said that some of the tunnels were so wide that a car could drive through them.

Sources noted that the tunnels look very much like the ones that were previously found in Eastern Ghouta. Since many of the militants from Ghouta have relocated to Idlib, it is possible that those who constructed the tunnels there are now overseeing the same work in Idlib.

Another local source in Idlib told Sputnik that a cold storage truck carrying gas cylinders had been spotted in the province. According to the sources, the truck arrived from Turkey and drove to the former headquarters of Hayat Tahrir al-Sham south of the city of Idlib. There, workers of African appearance, who spoke English and French, loaded the cylinders, which looked like oxygen tanks used in hospitals, onto the truck.

After it was fully loaded, the source said, the truck moved on — but this time it was accompanied by a column of cars equipped with machine guns belonging to Tahrir al-Sham and the Turkistan Islamic Party* in Syria. The cold storage truck made a stop in the Jisr al-Shughur region and then drove in the direction of northern Hama, the source told Sputnik. Its destination remains unknown.

Russian envoy to the UN Vassily Nebenzia warned the UN Security Council on August 28 that militants were preparing to stage chemical attacks in Idlib in order to pin it on Damascus. The information was earlier also reported by the Russian Defense Ministry, which noted that militants were planning to attack Hama and Aleppo as well, hoping that staged chemical attacks would force the US to launch more strikes against the Syrian army.

The US, UK and France earlier this year accused Damascus of using chemical weapons in Eastern Ghouta and launched coordinated airstrikes against the Syrian government facilities that had allegedly produced the weapons.

The airstrikes were condemned by Russia as an unprovoked attack against a sovereign state. The Russian Defense Ministry later presented witnesses of the so called "chemical attack" in Eastern Ghouta to members of the Organization for Prohibition of Chemical Weapons (OPCW). These witnesses said that there had been no chemical attack in Ghouta and recounted in detail how the video, allegedly proving the attack, had been staged.

*The Turkistan Islamic Party is a terrorist organization banned in Russia