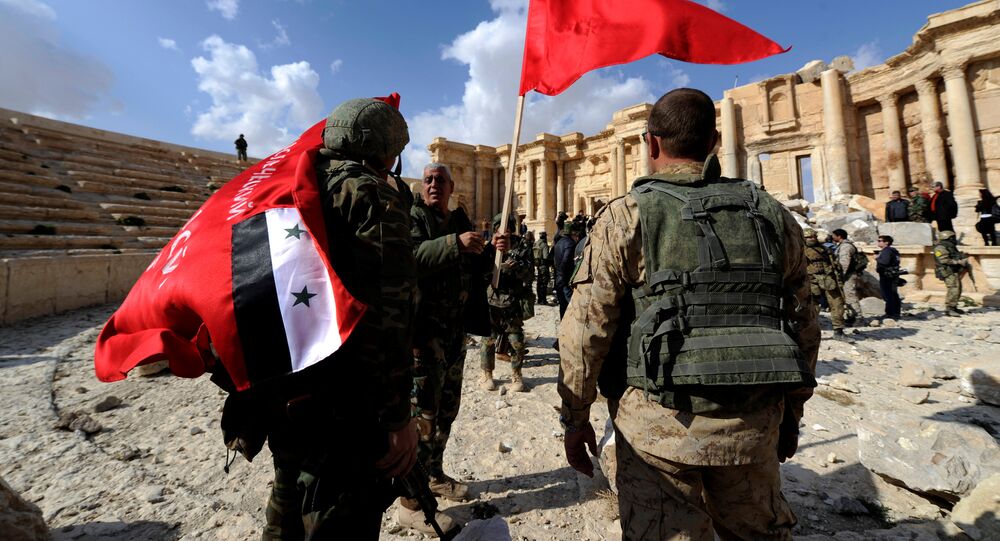 Russian MoD: Militants Plotted Attacks in Palmyra, Say They Were Trained by US

The militants that attempted to assault the city of Palmyra claimed that they belong to the "Lions of the East" group that is stationed near a US military base, the Russian Ministry of Defense reported.

The militant group "Lions of the East" was set to carry out terrorist attacks in the country, capturing Syria within one week, the Russian Reconciliation Center stated.

"The militants’ objective was to conduct a series of terrorist attacks in the vicinity of the city of Palmyra and to ensure the passage of the main forces of about 300 militants to capture the city within the next week," the center’s report said.

© REUTERS / Khalil Ashawi
Terrorist Attack in Northern Syria Kills Three, Injures Dozens - Reports (VIDEO)
According to the Russian Ministry of Defense, the militants, captured by Syrian government forces, claimed that they had been trained and armed by American instructors in a camp near the US military base in al-Tanf.

The information follows reports of clashes between Syrian troops and terrorists southeast of the city of Palmyra.

"Today, at 5:00 a.m. local time [02:00 GMT], 36 kilometers [22 miles] southeast of the city of Palmyra, clashes between Syrian government troops and a group of militants, who attempted to approach the city of Palmyra from the settlement of at-Tanf, took place… As a result of the clashes, two terrorists were killed, two more were detained and are being questioned," the Russian Ministry of Defense informed.

The Russian Ministry of Defense also stressed that during the whole time of existence of the US military base in al-Tanf there were no reports about any US operations in the area against terrorists.

"Refugees remaining in the [nearby] Rukban refugee camp are today in fact hostages, 'human shields' for the militants," the statement added.

The US-led coalition is conducting military operations against the Daesh* terror group in Syria and Iraq; however, the coalition's activity in Syria is not authorized by the government of President Bashar Assad or the UN Security Council.

The ancient city of Palmyra was captured by the Daesh terror group in 2015, but a year later Syrian forces, with the support of Russia, regained control of Palmyra. However, the Daesh militants recaptured the city in the end of 2016, untill it was finally liberated by Syrian army, supported by Russia in March 2017.