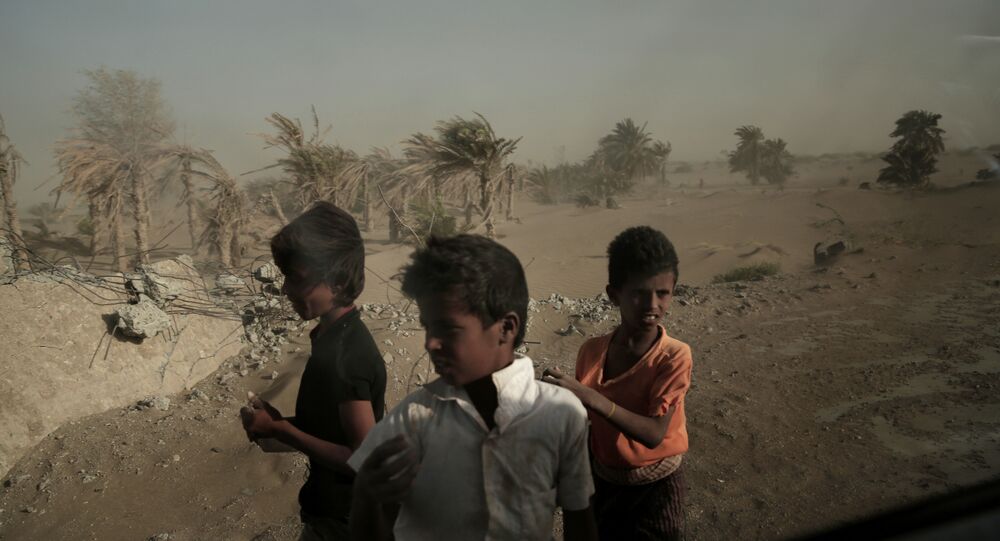 According to the United Nations, at least 22 children and four women were killed on Thursday attempting to escape fighting between Saudi-led militants and Yemen’s Houthi opposition faction in the Hudaydah governorate's al-Durayhimi district.

The Thursday massacre is the second airstrike in two weeks in which dozens of civilians — including many children — have been killed. Saudi strikes used US-built weapons to destroy a school bus traveling through northern Yemen, killing 51 people, including 40 children on August 9.

© Sputnik
Is Yemen The Saudis’ Vietnam?

"This is the second time in two weeks that an airstrike by the Saudi-led Coalition has resulted in dozens of civilian casualties," United Nations humanitarian chief Mark Lowcock said Friday, according to Npr.org.

"I had hoped that the outrage that followed the Saada attack in Yemen two weeks ago would be a turning point in the conflict. Yesterday's reported attacks in Al-Durayhimi, killing 26 children, indicate that it was not," Henrietta Fore of UNICEF stated Friday.

The bomb used in the August 9 bus massacre was identified as a "500-pound, laser-guided MK-82 bomb," made by Lockheed Martin, America's largest weapons builder, based out of Bethesda, Maryland, cited by CNN.

"These deaths are on our hands, and many more children will die in Yemen as long as the US supports the Saudi-led war," anti-war Quaker advocacy group Friends Committee on National Legislation tweeted Saturday.

The most recent war in Yemen began in 2014 after an armed Houthi Shiite opposition party ousted the country's Saudi Arabia-aligned Hadi government. The conflict escalated after a Saudi-led coalition intervened militarily the following year. In the four years since, an estimated 10,000-plus Yemeni civilians have died in attacks by the Saudi government and their allies primarily using US-built fighter jets, missiles and targeting technology.

Humanitarian and antiwar groups have criticized the United States for selling Saudi Arabia weapons, intelligence and war plane refueling logistics and the guidance technology for missiles and bombs.

On Wednesday, Democratic US Senator Chris Murphy commented on the Republican blocking of an amendment to the Defense Appropriation bill to place restrictions on US financial support for the Saudi-Arabia-led war in Yemen.

"The Republicans objected. It's just unthinkable to me that we continue to willingly participate in the slaughter of Yemeni kids when there is zero benefit to US security. Mind blowing really," Murphy tweeted August 22.

"Shame on those Senators who let our involvement in this war continue. History will not be kind to you," peace advocacy group World Without War tweeted August 24.