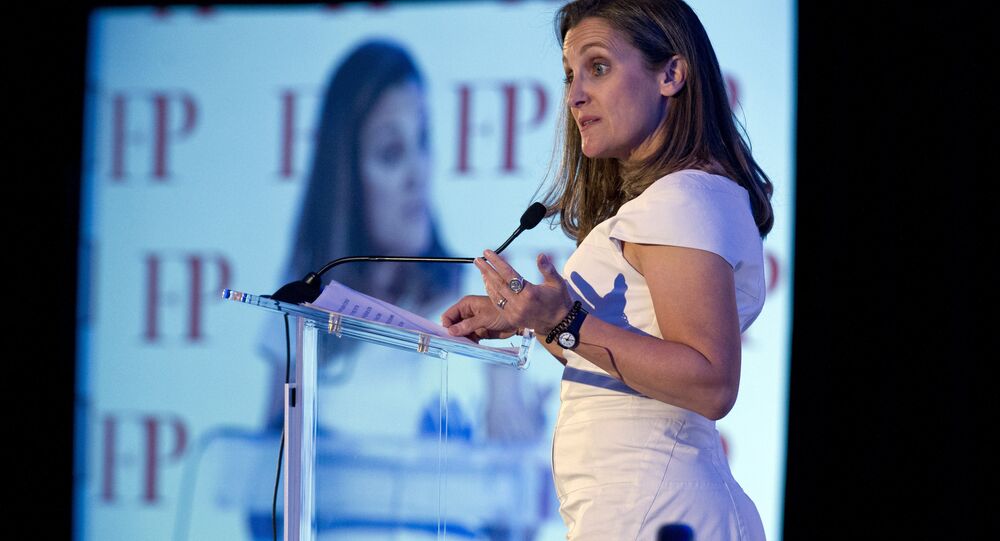 The Canadian government has poured salt in an already-open wound by renewing its criticism of Saudi Arabian human rights violations following a row earlier this month on the issue. This time, the subject is Israa al-Ghomgham, a female Shiite activist who faces the death penalty.

Ghomgham's trial began earlier this month, 32 months after her arrest in late 2015 in connection with her political activism, Sputnik previously reported. Along with five other activists, state prosecutors at the specialized criminal court in Riyadh are reportedly seeking the death penalty, which if delivered would make Ghomgham the first female activist to be executed by the Saudi state for her political activities.

Following the Arab Spring uprisings in Tunisia, Egypt and other Arab countries in early 2011, a wave of protests and civil disobedience swept across Saudi Arabia's Eastern Province, where most of the country's oppressed Shiite minority lives, including Ghomgham.

As part of that movement, which persisted until 2014, Ghomgham "called for fundamental and basic civil and political rights such as peaceful assembly and expression, called for the release of prisoners of conscience and human rights defenders and expressed her peaceful opinions on social media platforms," the European Saudi Organization for Human Rights (ESOHR) noted.

On August 21, the Canadian Ministry of Foreign Affairs released a statement on Ghomgham's arrest and trial.

"As Minister [Chrystia] Freeland has previously stated, Canada is extremely concerned by the arrests of women's rights activists," spokesperson Adam Austen said, according to Globe and Mail. "These concerns have been raised with the Saudi government. Canada will always stand up for the protection of human rights, including women's rights and freedom of expression around the world."

The Foreign Affairs Ministry notably skirted the landmine it stepped on at the beginning of the month when Freeland demanded the Saudi kingdom "immediately release" activist Samar Badawi and other female activists being held in detention, Sputnik reported. In response to the Canadian rebuke, the Saudi government took explicit affront to the statement's phrasing, calling it a "reprehensible and unacceptable use of language" and prompting the tit-for-tat in which neither side has backed down. The two nations have frozen each others' assets, recalled or dismissed diplomats and employed a host of other measures.

Perhaps the most shocking reaction in that spat has been a now-deleted Tweet made on August 6 by an account linked to the Saudi government which seemed to many to be a thinly veiled threat of terrorism, making reference to the September 11, 2001 attacks. Fifteen of the 19 hijackers who carried out those attacks were Saudi citizens.

Now deleted, here a screenshot of the threatening Saudi "infographic" featuring an airliner headed for the Toronto skyline. pic.twitter.com/LrkCLxxjFk

The Canadian government "could've done this by discreet message through the ambassadors or exerted pressure that way, but to do it this openly seems to have really gotten to the Saudis," he told Sputnik Radio's Loud & Clear.

"But what's behind it may be friction developing over the last couple of years about the big arms deal that was made between Canada and Saudi Arabia, the $15 billion for selling armored cars to Saudi Arabia. The deal was that it was to be kept secret, but when Trudeau came to power a couple of years ago, details were leaked about what was going on, and then stories about these armored cars being used to attack people in Yemen and crush internal dissent and so on, it caused the Saudis a lot of problems and really angered them, and they felt they were being betrayed. Canada was taking their money but making them look bad at the same time," Black said.

The Globe and Mail reported in July 2017 that videos showing Gurkha RPVs, produced by Terradyne Armored Vehicles outside Toronto, were filmed in 2015 in the eastern Saudi port city of Qatif — Ghomgham's hometown. The "serious violations of human rights" Canadian Prime Minister Justin Trudeau's government began investigating were connected to the repression of the dissident Shiite movement in which Ghomgham had taken part.