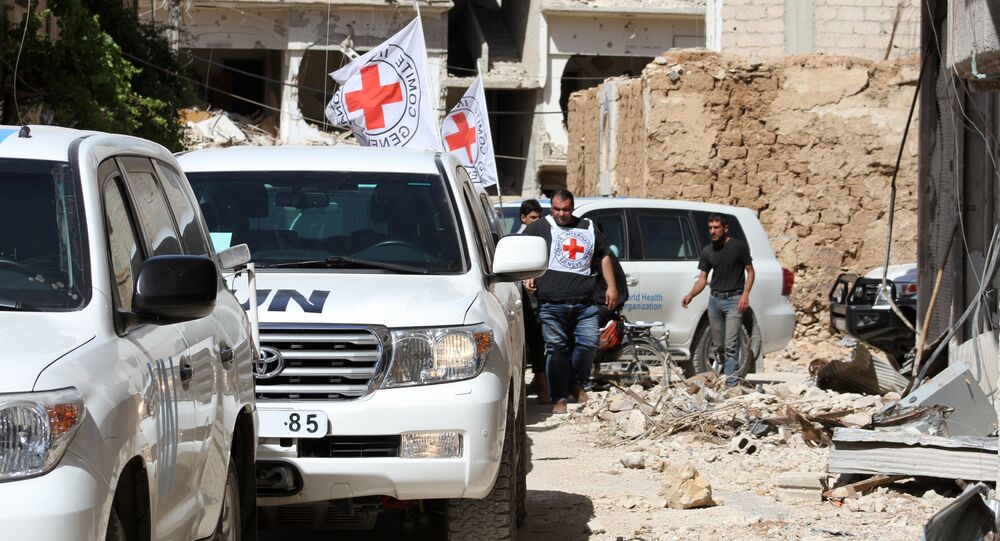 Red Cross to Scale Up Work in Syria in 2019, Alongside Red Crescent - President

GENEVA (Sputnik) - The International Committee of the Red Cross (ICRC) intends to boost its operation in Syria in 2019 and increase cooperation with the Syrian Arab Red Crescent nonprofit, President of the ICRC Peter Maurer told Sputnik.

"We are [counting] on continuing to be active in 2019 in Syria. I think the ICRC will still be needed, and we are determined to grow our operation and cooperation with the Syrian Arab Red Crescent," Maurer said.

© AP Photo / Jon Chol Jin
ICRC Ready to Scale Up Humanitarian Program in North Korea - President
The ICRC president remarked that the situation on the ground had changed after large territories returned under the government control. At the same time, the humanitarian situation was not improving as rapidly as the military situation was changing, and the access given to humanitarian organizations did not increase fast enough to satisfy growing needs, Maurer said.

The ICRC president added that the changes on the ground led to those new needs appearing and stressed the need for the conflicting parties to respect the international humanitarian law.

Humanitarian aid workers have been facing an increasing number of security challenges over the last few years, while lack of access and red tape continue to be a problem as well, Peter Maurer said.

"Unfortunately we see over the last couple of years… growing numbers of security challenges for humanitarian work," Maurer said.

According to the ICRC president, the tendencies have generally been negative in the last few years.

"But it is not only the security of the humanitarian workers… It is also the lack of access, the administrative hurdles that humanitarians get confronted with, also the disrespect for national humanitarian law," Maurer explained.

The ICRC president stressed that most deaths of humanitarian workers occurred in only a few spots, and 80 percent of displaced persons had fled from the same spots.

Maurer said that these challenges had to be faced, and the international community had the necessary capabilities.

Talks with different parties to the conflict in Yemen give the International Committee of the Red Cross hope that it will be possible to bring more international staff back to the country, Peter Maurer said.

"A lot of interactions have taken place in Yemen with different parties to the conflict. Today … I am a little bit more optimistic that given the conversations that the ICRC had over the last couple of weeks, we will soon have the possibilities to bring the international staff in larger numbers back to Yemen," Maurer said.

The ICRC president stressed that the organization had always intended to return as soon as possible.

The talks with the parties to the conflict are moving in the right direction, Maurer said, adding that he was feeling more hopeful than two or three weeks ago.

In early June, the ICRC said they were recalling 71 workers from Yemen because of multiple security challenges the staff were facing there.

Yemen has been engulfed in a civil war between Houthi insurgents and the government of Abdrabbuh Mansur Hadi since 2015. A coalition of several states led by Saudi Arabia joined the conflict to support Hadi.