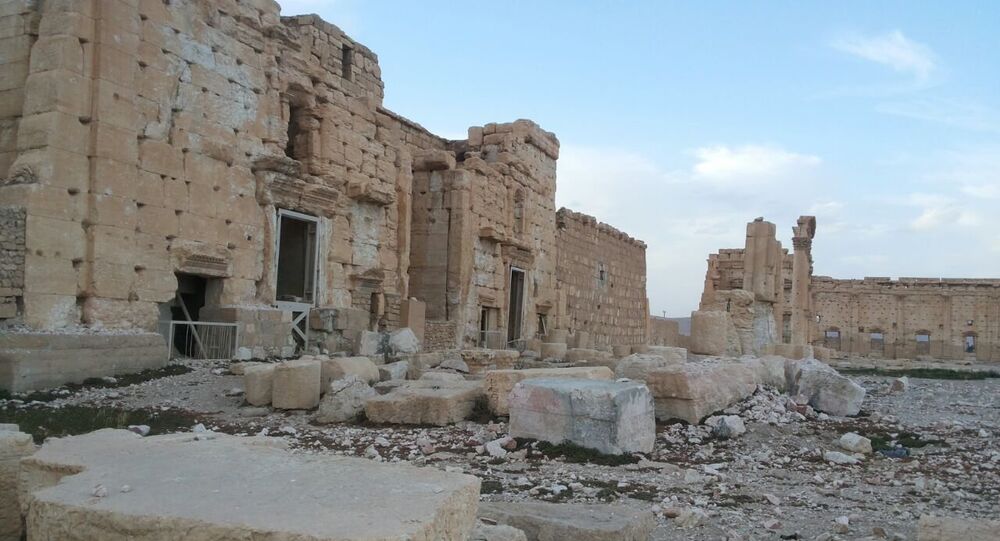 HOMS (Syria) (Sputnik) - Syrian Palmyra will be ready to receive tourists in the summer of 2019, Homs provincial governor Talal Barazi said on Wednesday.

Palmyra was the capital of the Palmyrene Empire and one of the richest cities of the Roman empire. The ancient ruins and monuments of Palmyra, a UNESCO World Heritage site, lost several important artifacts in the first attack of Daesh terrorist group in 2015. The Temple of Bel, Temple of Baalshamin, Arch of Triumph and columns in the Valley of the Tombs were destroyed by terrorists.

The city was eventually taken back by the Syrian government forces, but in December 2016, Daesh militants recaptured it, damaging the historic site even more. The Syrian forces regained control of the city in March 2017, and Russian engineers cleared the city of mines.

"The authorities now have a project to repair all the damage caused to Palmyra's Old City. There are also good offers from the world powers to restore the artifacts and historical value of Palmyra. I suppose that Palmyra will be completely ready for receiving tourists by summer 2019," Barazi said.

© Sputnik / Michael Alaeddin
Syrian Refugees Afraid to Return to Palmyra Due to Proximity of US Troops – Governor
UNESCO, Russia, Poland, Italy and other countries and institutions, as well as European non-governmental organizations, offered assistance in restoring the ancient city.

"This is the world history and it belongs not only to Syria," he concluded.

Meanwhile, the restoration of the historic center of the Syrian western city of Homs, which had been destroyed by militants, will begin later in 2018, Talal Barazi said.

"This year, the restoration and rebuilding of the old city of Homs will begin. The government has made all the necessary arrangements for this," Barazi told reporters.

© Sputnik / Michael Alaeddin
Reconstructing Syria: Russian Scientists Create 3D Model of Damaged Palmyra
Terrorists had held control over the center of Homs until May 2014, causing major damage to the city. The restoration of the 2,000-year old Homs central market, which began three years ago, will be completed in May 2019, the official added. Over 4,000 merchants are expected to return to the market, Barazi noted.

Terrorists inflicted at least $2 billion in damages in the Syrian province of Homs, Barazi said.

"It is very difficult to talk about an exact figure now, but if you count all the hospitals, schools, kindergartens, public institutions, houses — we can talk about the figure of $2 billion so far," Talal Barazi told reporters.

© Sputnik / Ministry of defence of the Russian Federation
Syrian Troops Extend Safe Zone Around Palmyra by 5-10 Miles - Russian Military
He said that Homs was returning to normal life, as it was in 2010 before the crisis.

The forces of Syrian President Bashar Assad have recently regained control over Syrian territories once controlled by terrorists and militants. The authorities are now engaged in dealing with the humanitarian disaster and rebuilding the country with the help of Russia.

Syria has been torn by civil war since 2011, with the government fighting numerous opposition groups and terrorist organizations.