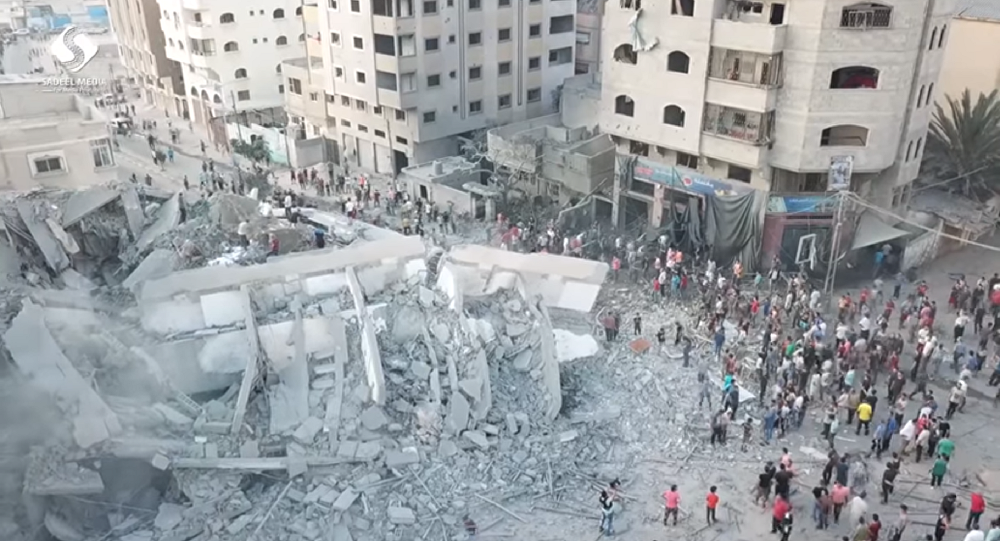 Israel bombed the Said al-Mishal Cultural Center on Thursday in what the country said was retaliation over rocket fire from Gaza before before reaching a ceasefire with Hamas later that night.

The Israeli military argues that the cultural center "served as the office of active" Hamas political operatives, calling them "the operational arm of the political leadership of the Hamas terror group."

Palestinian journalist Yousef Aljamal condemned the bombing as an erasure of Palestinian culture, posting video from a musical performance in the building in 2016.

Now, in protest, Gazans have returned to the cultural center, reduced almost completely to rubble, and played music on top of it.

The destruction of the five-story building was caught on video from multiple angles. Israel said Thursday that it had struck 150 targets in the tiny, tightly-packed enclave since Wednesday night. The IDF said it is intentionally striking civilian areas "so residents feel the price of the escalation and demand explanations from Hamas."

Eighteen Palestinians were wounded on Thursday, according to the Gazan Health Ministry. On Wednesday night, a 23-year-old woman, Inas Khamash, who was nine months pregnant, was killed, as well as her toddler and another man. The Health Ministry said the unborn unborn baby was "born a martyr."

Israel says its airstrike campaign was a response to rocket fire. Reports say some 200 low-tech missiles had been fired from Gaza ahead of Israel's retaliation. Nineteen were reportedly injured from rocket fire this week.

The Israel Defense Forces (IDF) released footage from the jet that conducted the bombing.

The aftermath of the strike was also filmed via drone.

On Friday, the day of the week Palestinians have been demonstrating in Great Return March protests, thousands of Gazans took to the fence that separates their enclave from Israel. Two Palestinians were killed, including a medic, and 307 were wounded.

In total, 159 Palestinians have been killed since the start of the protests in March. One Israeli soldier has also been killed.