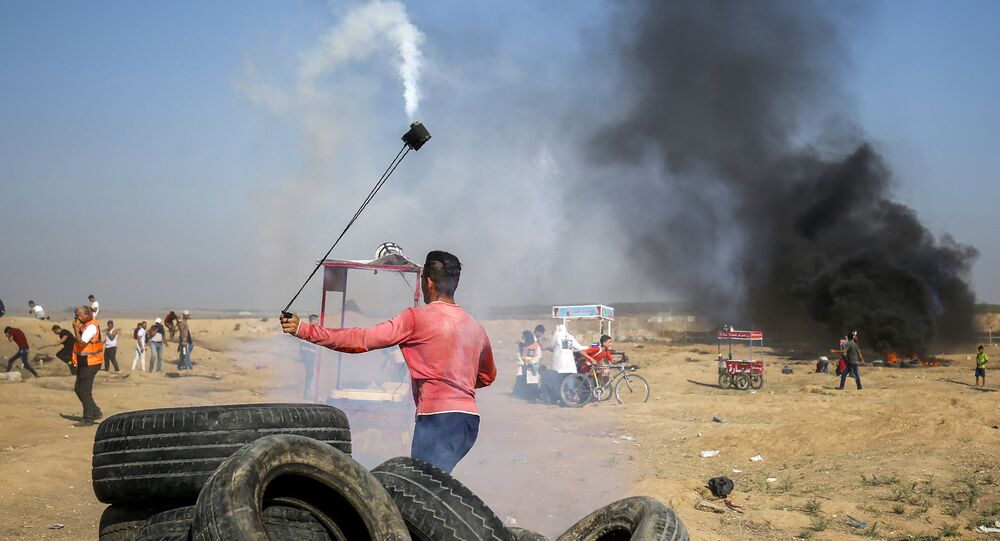 GAZA (Sputnik) - A Palestinian doctor was killed on Friday in clashes with the Israeli forces in the Gaza Strip, while 84 people were injured, Gaza Health Ministry spokesman Ashraf Qedra said.

"A doctor was killed, while another 84 people were injured," Qedra said.

About 9,000 Palestinians have gathered along the Israeli-Gaza Strip border, the protests are accompanied by attacks on Israeli troops, the Israel Defense Forces (IDF) press service said.

"Approx 9,000 rioters are gathered along the security fence between Gaza and Israel. They are burning tires and hurling rocks, explosive devices, and firebombs at IDF troops and the security fence… A number of terrorists hurled a grenade at IDF troops in the northern Gaza Strip. No IDF troops were injured. In response to the violent riots, IDF tanks struck two Hamas posts in the northern Gaza Strip," the press service said on Twitter.

According to the IDF, the Israeli troops are responding with riot dispersal means and acting in accordance with standard operating procedures.

© AP Photo / Khalil Hamra
‘Murderous Terrorist Group': Israeli Minister Reportedly Urges Targeted Killings of Hamas Leaders After Gaza Violence
Israel and Palestine have been exchanging fire since late Wednesday, with the IDF saying that Palestinians launched about 180 rockets and mortar shells from Gaza, injuring seven Israelis, while the IDF responded with over 150 airstrikes aimed at military targets in the Gaza Strip. The Palestinian health authorities have claimed that 12 people were injured as a result of the airstrikes and three people died, including a woman and a child.

Palestinian-American Progressive Wins in MI, But Can Dems Really Change?