Miri Regev, a former member of the Israeli military, made the statement after Israel and Hamas exchanged hostilities across the Gaza border during an outbreak of violence this week.

Israeli Culture and Sport Minister Miri Regev advocated the state-sanctioned assassination of Hamas leaders on Thursday following an intense 24 hours of hostilities between Israel and the militant group.

"The equation should be very simple: If our children live in fear, then the leadership of Hamas should live in fear," Regev said, as quoted by The Jerusalem Post. She added that the country must go back to the policy of targeted assassinations of leaders of what she called a "murderous terrorist group."

Regev spoke with the heads of communities located near the Gaza Strip. "They told me about the inconceivable reality of children who cannot enjoy camp and social activities like the rest of the children in Israel," she said. "This is not what their summer vacation should look like."

Her statement came after Israel and Hamas, the militant group that rules the Gaza enclave, reportedly reached a ceasefire "on the basis of mutual calm" following the latest uptick in violence this week. 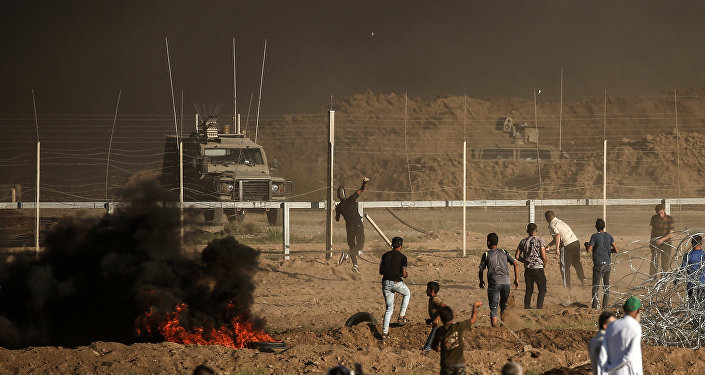 © AFP 2019 / MAHMUD HAMS
Israel, Hamas Agree to Ceasefire - Reports
On Wednesday, Hamas fired over 180 rockets at Israel's southern communities, prompting a response from Israeli jets, which bombed more than 150 targets in Gaza. According to the local media, the heavy fire left one woman in Israel seriously injured while two others received "light" injuries. According to Gaza's Health Ministry, three Palestinians were killed and several others were injured.

Miri Regev is a former brigadier general who served as a spokesperson for the Israeli Defense Forces (IDF) in 2005-2007. After stepping down from the military post, she launched a political career and became the minister of culture and sport in 2015. Described by The Times of Israel as an outspoken supporter of Benjamin Netanyahu, she also served as acting PM when he would go abroad.