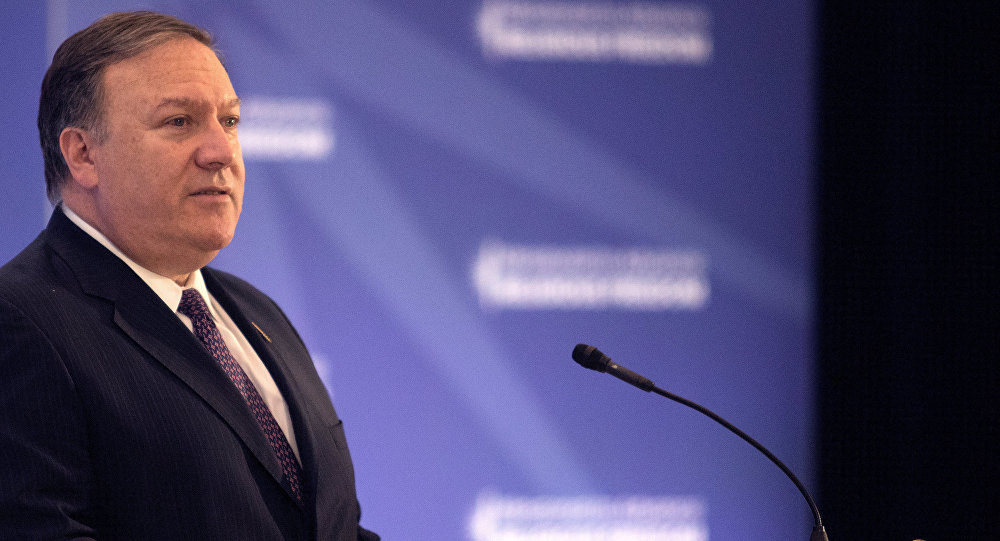 US Secretary of State Mike Pompeo said Sunday that the United States would "enforce the sanctions" it is reimposing after US President Donald Trump pulled out of the 2015 nuclear deal.

Mike Pompeo said that increasing pressure on Tehran was meant to "push back against Iranian malign activity," adding that Iranians "are unhappy with the failure of their own leadership to deliver the economic promises that their leadership promised them," Pompeo was quoted as saying by AFP.

“The United States is going to enforce these sanctions. We’re going to enforce these sanctions. Just go look at the reporting on what’s taking place.  The Iranian people are not happy – not with the Americans, but with their own leadership,” Pompeo said at a briefing in response to a question on whether Iran would be able to break the US restrictive measures, as quoted in the statement of the US State Department.

© REUTERS /
Trump's New Plan: CIA May Be Mulling Over 'Regime Change Strategy' Against Iran
"This is just about Iranians' dissatisfaction with their own government, and the President is pretty clear, we want the Iranian people to have a strong voice in who their leadership will be," Pompeo was quoted as saying AFP.

As for possibility of Washington reversing its decision on the sanctions, the state secretary said Tehran will first have to drastically reconsider its political course.

“Yeah, so the President [Trump] and I too have been very clear.  We’re very hopeful that we can find a way to move forward, but it’s going to require enormous change on the part of the Iranian regime.  They’ve got to – well, they’ve got to behave like a normal country.  That’s the ask.  It’s pretty simple,” Pompeo said.

The official went on to say to urge Tehran to respect human rights as about half a dozen Iranian cities reportedly have seen people take to the streets to protest against the country's deteriorating economy and worsening living conditions.

We are deeply concerned about reports of Iranian regime’s violence against unarmed citizens. U.S. supports Iranian people’s right to protest against the regime’s corruption & oppression without fear of reprisal. We call on the regime in #Iran to respect its people’s human rights.

© AFP 2019 / HENGHAMEH FAHIMI
Iran Would Cut Off Its Own Foot By Closing Strait of Hormuz - Analyst
As of 0401 GMT Tuesday, the Iranian authorities can no longer buy US banknotes and broad sanctions will be imposed on Iranian industries, including its rug exports.

On Friday, Iranian Foreign Minister Mohammad Javad Zarif said that the US would consider the international community's opinion and correct the mistake of withdrawing from the Iranian nuclear deal.

On Tuesday, Zarif said that the US can only "blame" itself for terminating dialogue with Iran after withdrawal from the 2015 Joint Comprehensive Plan of Action (JCPOA).

© AP Photo / Vahid Salemi
Iran's Revolutionary Guard Holds Drills in Persian Gulf - Reports
"Iran & US had 2 yrs of talks. With EU/E3+Russia+China, we produced a unique multilateral accord—the JCPOA. It’s been working. US can only blame itself for pulling out & leaving the table. Threats, sanctions & PR stunts won’t work. Try respect: for Iranians & for int'l commitments," Zarif said on Twitter.

In May, Trump announced that his country would exit from the JCPOA, which stipulated the gradual lifting of the anti-Iran sanctions in exchange for Tehran maintaining the peaceful nature of its nuclear program. In addition, Trump decided to reinstate the previously lifted sanctions on Iran. The unilateral move has been opposed by other signatories to the agreement, which remained committed to the deal.