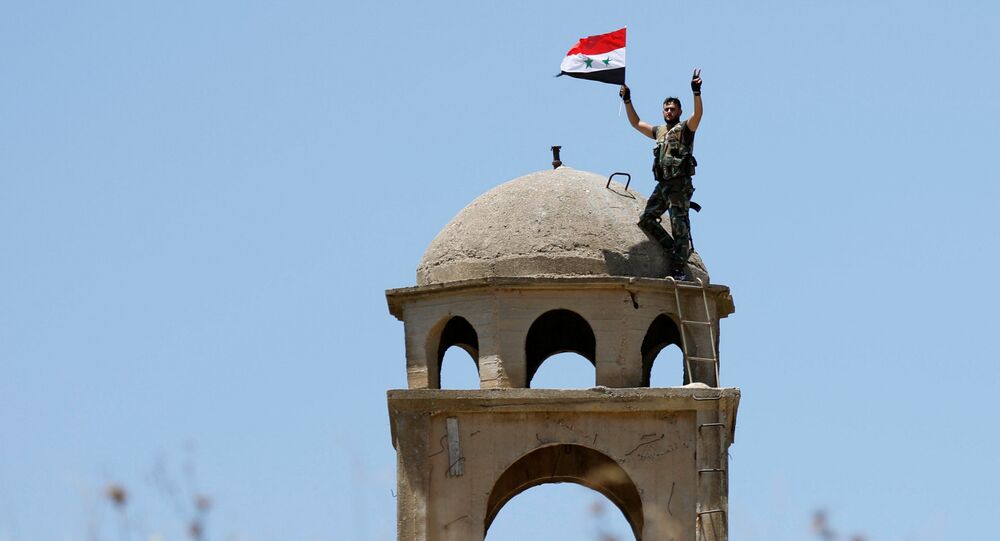 The find is the latest cache of foreign-made weapons discovered by the Syrian Army as it wraps up its operations against the terrorists in the country's south.

A Syrian Arab News Agency reporter embedded with the army in Quneitra province in the Golan Heights came upon a warehouse containing large stocks of weapons and ammunition used by the militants.

S. #Syria: Rebels in #Quneitra also handed over at least 9 #ATGM|s (#TOW|s, #Konkurs, #Fagot & #Malyutka) besides other weapons and variety of ammunition. pic.twitter.com/fd7C8tKh1r

Among the haul were US and Israeli-made weapons, Israeli food products, and a collection of supplies thought to have belonged to the White Helmets, a controversial rescue group which Damascus has accused of links to the jihadists. Photos from the Quneitra stockpile include the distinctive White Helmets' style helmets, gasmasks, oxygen tanks, and other equipment.

#Syria CS of #Quneitra: the #SyrianArmy confiscated a large number of weapons, ammunition, food and medicines belong to the so-called #WhiteHelmets #SAA pic.twitter.com/PROTm8SNj3

According to SANA, the search for warehouses containing weapons used by militants continues, with the jihadists believed to have hidden large stocks of weapons in underground caches in local villages and adjacent plantations before fleeing.

On Thursday, the Russian General Staff confirmed that the Syrian government had successfully reestablished control over the provinces of Al-Suwayda, Daraa, and Quneitra in southern Syria. Thanks to the efforts of the Russian Center for Reconciliation, the majority of the so-called 'moderate' militants laid down their arms without a fight, and joined government forces to liquidate Daesh (ISIS)* and Nusra Front* militants. Others were evacuated with their families to Idlib province in Syria's north, which remains under opposition control.

The Syrian-controlled portion of Quneitra, delineated under the 1974 military disengagement agreement with Israel, borders on the Israeli-occupied portion of the Golan Heights, a strategically important elevated territory on the Syrian-Israeli border which Tel Aviv seized and annexed following the 1967 Arab-Israeli War. The United Nations Security Council rejected the move and called the 1981 annexation and decision to impose Israeli laws, jurisdiction and administration over the Syrian territory "null and void and without international legal effect."

On Thursday, Sputnik Arabic published videos of Syrian forces returning to areas delineated under the 1974 disengagement agreement for the first time since 2011.

*Terrorist groups outlawed in Russia and many other countries. Nusra Front, aka Jabhat Fatah al-Sham, has also been described as al-Qaeda in Syria.