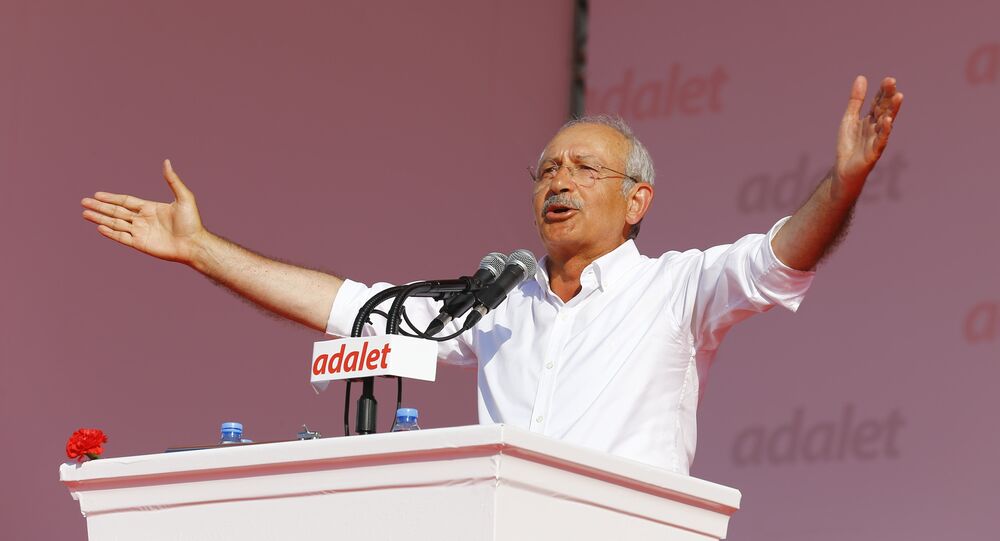 MOSCOW (Sputnik) - Kemal Kilicdaroglu, the leader of Turkish Republican People's Party (CHP), on Thursday criticized the US decision to sanction two Turkish ministers for their alleged roles in detention of a US pastor and called for talks with Washington, the Anadolu news agency reported.

On Wednesday, the United States announced that it was imposing sanctions on Turkey's Minister of Justice Abdulhamit Gul and Minister of Interior Suleyman Soylu for leading roles in the imprisonment of US pastor Andrew Brunson.

Kilicdaroglu said the sanctions were "not right," and reminded that the two countries were allies, the Anadolu news agency reported.

Turkish Parliament Speaker Binali Yildirim condemned on Thursday Washington’s decision to impose sanctions on two Turkish ministers over their alleged role in the imprisonment of US pastor Andrew Brunson.

"The sanctions decision taken by the US Secretary of Treasury has targeted our Justice Minister Abdulhamit Gul and our Interior Minister Suleyman Soylu, which is unlawful and extremely arbitrary … I strongly condemn this decision that is an indicator of a disrespectful manner on judicially process in Turkey," Yildirim said, as quoted by the Anadolu news agency.

© AP Photo / Burhan Ozbilici
Turkish FM: US Sanctions Move Will Not Be Left Without Retaliation
Turkish Foreign Minister Mevlut Cavusoglu said Wednesday that Ankara would not leave the US punitive measures against the ministers without a response.

Erdogan Warns US Against Using Threatening Language Toward Turkey