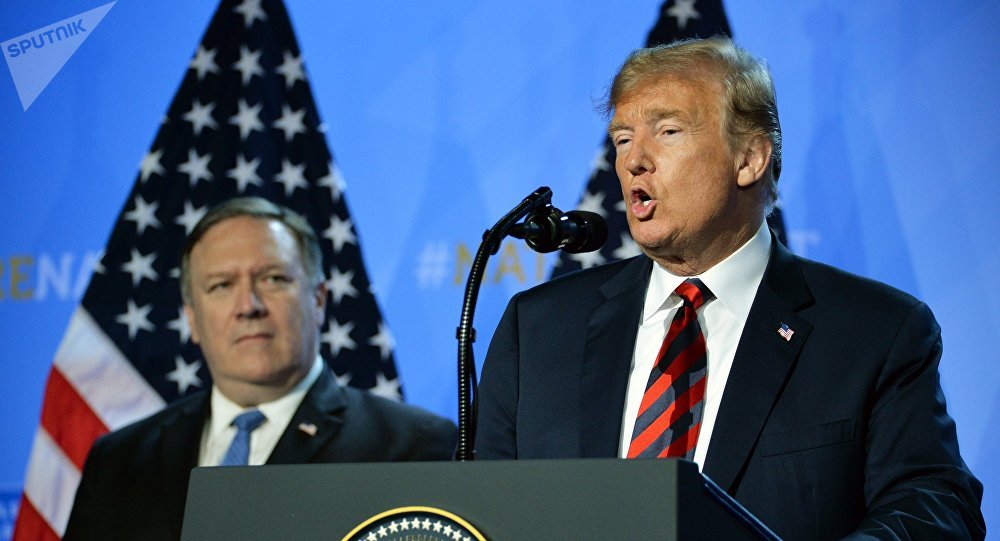 The US president earlier stated that he is ready for talks with Iran as long as it is willing to hold negotiations. He added that he requires "no preconditions" to hold them; however, it seems that both Tehran and members of Trump's own administration disagree with his vision for talks.

In an interview with CNBC, US Secretary of State Mike Pompeo presented a list of preconditions that Iran needs to meet in order to begin negotiations between Tehran and Washington. According to him, Iran must first "demonstrate a commitment" to change its attitude towards its own citizenry, "reduce malign behavior" and be ready to reach a new agreement on its nuclear program.

His comments come in contradiction with what President Donald Trump said earlier during a press conference with Italian Prime Minister Giuseppe Conte. During the presser, Trump said that he was ready to meet the Iranian president "any time, no preconditions," if Rouhani desires to do so.

"No preconditions, no. If they want to meet, I'll meet any time they want. Good for the country, good for them, good for us and good for the world. I'll meet with anybody. There's nothing wrong with meeting," Trump said.

Trump's words come hot on the heels of recent saber rattling between the two countries. Iran cautioned the US against blocking its oil exports and vowed that a war with Iran would be the "mother of all wars," while the US president posted an all-caps tweet warning Tehran against threatening Washington.

Tehran: Talks With US "Would Be Humiliating" for Iran Right Now

One of Rouhani's advisers, Hamid Aboutalebi, echoed Pompeo in attaching preconditions to potential future talks between the US and Iran. He wrote on Twitter that Washington first needs to start "respecting the Iranian nation's rights," reduce "hostilities" and return to the abandoned Iran nuclear deal. Deputy Speaker of the Iranian Parliament Ali Motahari added to Aboutalebi's words by saying it would be "humiliating" for Iran to hold talks with the US right now.

Iranian Interior Minister Abdolreza Rahmani Fazli has joined in condemning Trump's idea for talks, saying that the US is not "trustworthy," as it unilaterally has withdrawn from the Iran nuclear deal.

Separately, the head of Islamic Revolutionary Guards Corps (IRGC) has blasted Trump as an "amateur" politician and stated that Iranian officials would never meet him "or any other US president."

"Mr Trump! Iran is not North Korea to accept your offer for a meeting," Guards commander Major General Mohammad Ali Jafari was quoted as saying by Fars News agency. "

Relations between Washington and Tehran have been steadily worsening since President Trump withdrew the US from the Iran nuclear deal, which lifted economic sanctions that had been imposed on the Islamic Republic in exchange for the country maintaining a peaceful nature of its nuclear program. Secretary of State Mike Pompeo promised that Washington would re-impose sanctions against Iran and that they would be "the harshest ever." Donald Trump has been a consistent critic of the Iran nuclear deal, having claimed during his presidential campaign that it was "flawed at its core."