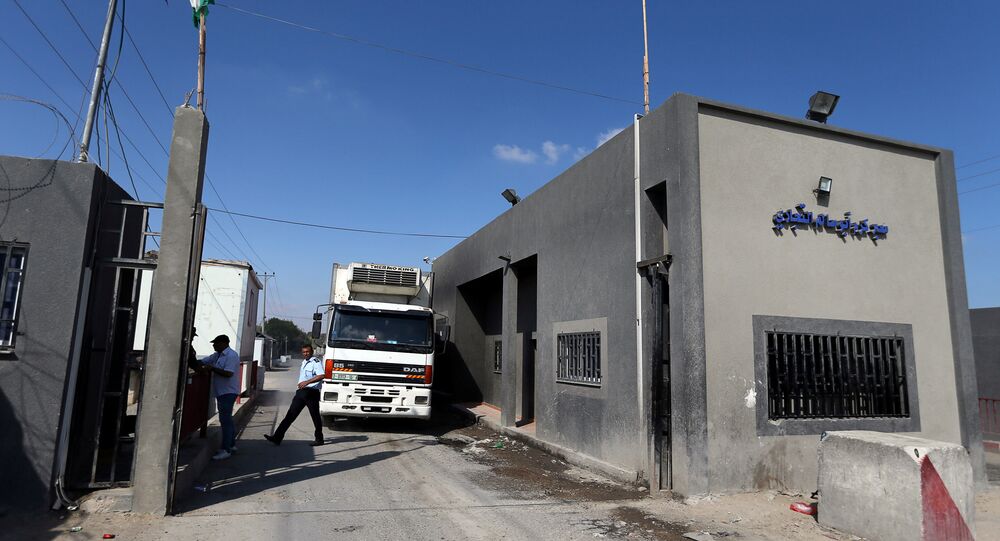 TEL AVIV (Sputnik) - Israeli Defense Minister Avigdor Lieberman promised on Sunday to normalize the work of the only cargo crossing on the border with the Gaza Strip starting from Tuesday, provided that the Palestinians respect the truce agreement.

"The residents of Gaza should realize that as long as arson balloons are being sent in our direction, the life on their side will not return to normal. Yesterday [the situation] was calm, if it stays like this until Tuesday, Kerem Shalom might resume its work fully," the minister wrote on his Twitter blog, following his visit to the cargo crossing.

© AP Photo / Ariel Schalit
WATCH Israeli Aviation Strike Targets in Gaza Amid Uptick in Tensions
On Saturday, a top-level source in Jerusalem told Sputnik that Hamas movement, de facto governing the Gaza Strip, had agreed to accept the Israeli demands and stop clashes between protesters and the police officers in the border area, as well as to halt the launches of arson balloons.

In early July, the Israeli authorities closed the Kerem Shalom checkpoint intended for the commercial imports and exports in an attempt to put an end to disturbances and airborne arson attacks on the border with Gaza. For the same purpose, Israel then imposed an embargo on deliveries of any fuel to the area.

The agreement between Israel and Hamas was reached under Egypt's mediation on Friday evening. The talks were preceded by a massive bombing of Hamas facilities on the same day in response to the killing of an Israeli soldier on the Israeli-Gaza border.