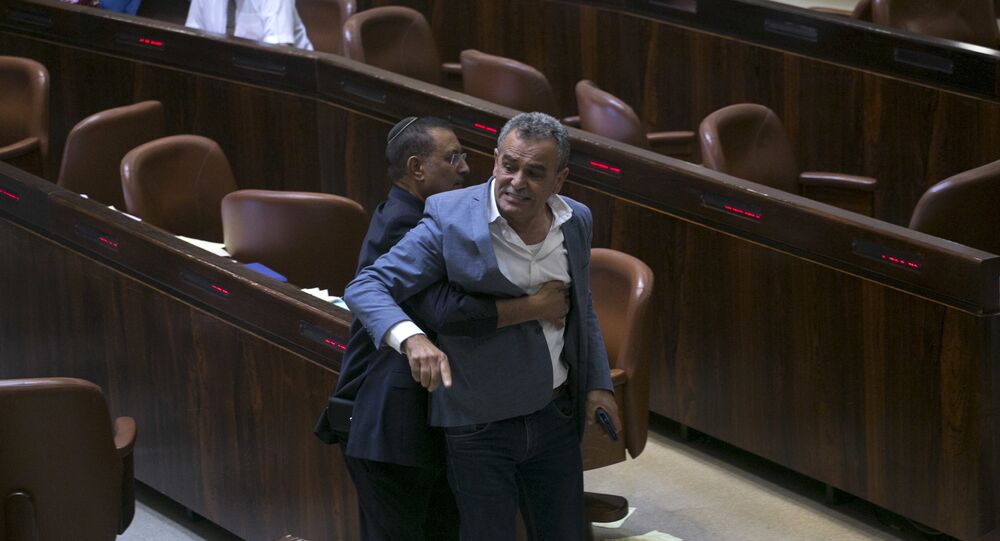 Israel's parliament has passed the 'Israel as the Nation-State of the Jewish People' Basic Law. The new law has faced opposite reactions from the dominant Jewish community and the country's minority Arab speakers. Sputnik takes a closer look at what the new law entails.

The new law passed Thursday by a vote of 62 to 55 after hours of heated debate, enshrining the country's status as "a Jewish nation-state" into the constitution.

While much of the law includes symbolic clauses on issues including state symbols, Israel's capital, the official calendar, days of rest, etc., perhaps the most controversial point is the newly-minted "special" status of the Arabic language.

The Language clause states: "A. The state's language is Hebrew. B. The Arabic language has a special status in the state; Regulating the use of Arabic in state institutions or by them will be set of laws. C. This clause does not harm the status given to the Arabic language before this law came into effect."

While Israeli PM Netanyahu praised the law as "a pivotal moment" in the country's history, some contend that in reality what it does is call things as they stand. Kadima lawmaker Avi Dichter, who submitted the original 2011 version of the Nation-State bill and sponsored the version which was enacted on Thursday, has insisted that the status change would merely enshrine the existing language situation into law, and argued that the earlier official status, which included Arabic as an official language, was a relic of the period when present-day Israel was a British colony.

During the debates, Dichter argued that "unlike the disinformation and fake news that were tossed around [regarding the bill], this Basic Law doesn't hurt the culture of minorities living in Israel, doesn't hurt their sabbaticals and holidays and certainly doesn't hurt the Arabic language, which remains the mother tongue for 1.5 million of Israel's citizens."

Avraham Diskin, a professor and political scientist who wrote the original Nationality Law nearly a decade ago, echoed the opinion that the law is largely symbolical, calling it "declarative" and "without a lot of practical" consequences.

Arabic is spoken by several groups in Israel, including Arab Israelis and Arabic-speaking Jews. Total speakers number an estimated 1.6-1.8 million, or about 20% of the country's population of 9 million.

Since the creation of Israel in 1948, the remaining Arab citizens have been granted the same rights as the Jewish population under the legal code.

In practice, ever since 1948, Arabic speakers have claimed they have experienced discrimination, including problems with accessibility to the language in public institutions. However, in 2000, Israel's Supreme Court ruled that Arabic must become more widely visible in public areas, including in things like food labels, road signs, public transit, and government announcements. Arabic enjoys the status of the second language in parliament, but has been rarely used.

Amir Fuchs, a researcher at the Jerusalem-based Israel Democracy Institute, hit back at the fresh legislation. "What can be gained other than offending the Arab minority?" he asked. Some contend that what else can be gained is the PM boosting Israeli nationalism for his political gains.

Tzipi Livni, Zionist Union leader and Israel's former foreign minister, suggested that the law was meant to play into the hands of Benjamin Netanyahu rather than define Israel as the nation-state of the Jewish people.

"When I asked coalition MKs why they weren't bringing forth a version of the law that a hundred MKs could unite around, they smiled at me cynically and said Netanyahu wants the law to create strife. ‘Otherwise how will people know he's more patriotic than you? What will we get out of supporting it?' That's the method," she said, as quoted by The Times of Israel.

Netanyahu himself has been among the proponents of the law. "An absolute majority wants to ensure our state's Jewish character for generations to come," he told the Knesset.